Environmental and consumer groups have pushed for the early closure of a 50-year-old coal-fired power plant in West Virginia that serves electricity customers in both West Virginia and Kentucky.

In a filing last week with the Kentucky Public Service Commission, Cameron recommended the commission reject Kentucky Power’s request for $67 million in upgrades for the Mitchell Plant in Marshall County, West Virginia, paid for by its customers with a surcharge on their monthly bills.

Instead, Cameron said Kentucky Power, which owns a 50% share of the plant with Wheeling Power, should let it close in 2028. Both are subsidiaries of Ohio-based American Electric Power.

The Mitchell Plant, which opened in 1971, “provides little to no economic value to the commonwealth,” Cameron wrote.

Cameron noted that none of the plant’s workers live in Kentucky, it uses very little Kentucky coal and contributes no tax revenue to Kentucky communities.

That’s precisely the opposite of the case West Virginia officials are making to that state’s public service commission to keep the plant open until 2040. The plant employs more than 200, uses West Virginia coal and contributes millions of dollars in tax revenue to the nearby community. 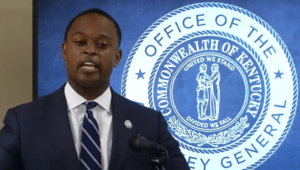 Both Republican attorneys general are on the same side in a legal challenge to the U.S. Environmental Protection Agency’s authority to regulate emissions from power plants.

Both are from states that are heavy producers and consumers of coal and where fossil fuel production is embedded in the culture and history.

But on the fate of the Mitchell Plant, they’re at odds.

Kentucky Power serves about 165,000 customers in eastern Kentucky. The average customer would pay as much as $2.26 each month to cover the cost of upgrading the Mitchell Plant.

In its own presentation to the commission, Kentucky Power testified that the plant would continue to be economical to operate through 2040.

For example, he wrote that the company vastly overstated the cost of solar energy as a replacement. Kentucky Power’s analysis assumed a price of $55 a megawatt hour.

He said the company failed to consider the tax benefits of retiring the Mitchell Plant in 2028. According to Cameron’s estimate, the savings could approach $29 million.

“The savings to ratepayers from retiring the units in 2028 rather than 2040 are substantial,” Cameron wrote.

She said making the upgrades to the Mitchell Plant “provides greater benefits to customers including providing reliable, low-cost baseload generating capacity and delaying the need to procure hundreds of millions or billions of dollars of replacement generation.”

Elizabeth Kuhn, a spokeswoman for Cameron, said the attorney general “unequivocally supports the operation of Kentucky coal plants for as long as possible.”

She said he “advocates for Kentucky Power to use energy resources located in the commonwealth, which would benefit Kentucky’s economy and Kentucky ratepayers.”

Kentucky regulators will issue a decision on the Mitchell Plant by Aug. 8.

The Mitchell Plant could close before 2040 even if the full upgrades are completed due to changing economic, political and environmental factors, Cameron argued. Those include a tax on carbon dioxide emissions, increased operating costs and the availability of natural gas and renewable energy.

“Kentucky Power’s proposal to invest millions of dollars to enable continued operation of a West Virginia coal plant through 2040 fails to adequately address the risk exposure inherent in that approach,” he wrote.

NOTE: This story was updated on June 30, 2021, to include additional comment from Attorney General Cameron’s office.