Nearly Half A Million In Ohio Valley Lose Jobless Benefits

An analysis by the Ohio Valley ReSource showed that roughly 488,000 people in Ohio and West Virginia have lost supplemental unemployment payments after Republican governors there scrapped the federal unemployment benefit programs put in place during the pandemic.

Another 65,000 people in Kentucky eligible for the payments await a decision by the Democratic governor there who is facing mounting pressure as business owners claim that the expanded unemployment compensations have resulted in labor shortages.

Kentucky Gov. Andy Beshear hasn’t announced any intentions to drop the federal unemployment assistance, but he told Kentuckians that they will receive a $1,500 bonus if they go back to work by July 30.

As part of the massive federal effort to offer economic relief during the pandemic, Congress added funding to expand states’ ability to provide unemployment benefits to workers who wouldn’t otherwise qualify for the state unemployment insurance. Additionally, under the American Rescue Plan, the unemployed workers were receiving an extra $300 weekly benefit.

Ohio Gov. Mike DeWine and West Virginia Gov. Jim Justice opted out of the enhanced federal payments in the past two weeks.

“West Virginians have access to thousands of jobs right now. We need everyone back to work. Our small businesses and West Virginia’s economy depend on it,” Justice said in a May 14 press conference.

A  day before that, DeWine said the expanded federal benefits had been a “lifeline” for many Americans at the height of the pandemic, but “This is no longer the case as we now have an abundant supply of vaccines.”

Nearly half a million workers in Ohio and West Virginia lost their $300 weekly payments, including 450,000 in Ohio and 38,000 in West Virginia, according to a Resource analysis of the labor department’s latest benefit claim filings data.

As of June 12, around 33,000 workers in the Ohio Valley made new applications for state unemployment benefits or to start a second or subsequent period of unemployment within a benefit year. In addition, about 25,000 made new claims for the federal pandemic benefits, with a majority of those coming in Kentucky.

On Monday, U.S. Senate Minority Leader Mitch McConnell urged Beshear to cut off the additional weekly unemployment payments, citing his discussions with the business owners in the commonwealth.

“There’s no question that we’d be in better shape if the governor had made a decision to discontinue the federal bonus as 25 other states have,” McConnell said.

But supporters of the programs have called the extra $300 weekly benefits a “vital lifeline” because it helps workers who’ve been laid off or can’t find work during the pandemic.

Kentucky union leaders and nonprofits, in a letter to Beshear in May, said that it would be premature for the state to end the benefits, and challenged the notion that people have stopped looking for work because of the federal programs.

“Some are falsely claiming that the extra $300 in benefits is keeping people from working, but in fact Kentuckians are returning to work in huge numbers,” they said, adding that the benefits also add money to local economies and boost demand for goods and services.

“Most of the complaints about an alleged labor shortage come from restaurants offering low wages, few benefits and little workplace flexibility,” the Kentucky coalition, in their letter to Beshear, said.

“Even with the limited appeal of restaurant work people are returning to those jobs in huge numbers.”

When the COVID-19 pandemic forced state economies to shut down in March, workers lost jobs at a rate not seen since at least the 2007-08 financial crisis. The unemployment rates in the Ohio Valley peaked at 16% to 17% in all three Ohio Valley states in April 2020, surpassing the nationwide rate of 14.8%.

From their April 2020 peaks, however, the state labor markets have recovered by more than 10 percentage points in the Ohio Valley states, faster than the nationwide recovery of 9% –– with Kentucky seeing the fastest decline in unemployment rates in the region.

But the recovery hasn’t been uniform across all sectors of the economy as the hospitality and leisure sector that includes hotels and food services businesses reported the highest rate of job openings among all major sectors. While most sections of the economy are yet to reach their pre-pandemic workforce levels, hotels and restaurants, particularly, are the farthest away from the full recovery.

Because of the unequal impact of COVID-19 on people of color, the federal pandemic assistance helped families buy meals and pay bills. In the Ohio Valley, Black Americans file for unemployment benefit claims at a rate that is twice their population share in the region.

The leisure and hospitality industry, a major source of jobs for  many people of color, is the lowest-paying employment sector in the Ohio Valley. A worker in this industry makes an average $380 a week, the lowest among all major industries and roughly equal to the amount of average weekly unemployment benefits. 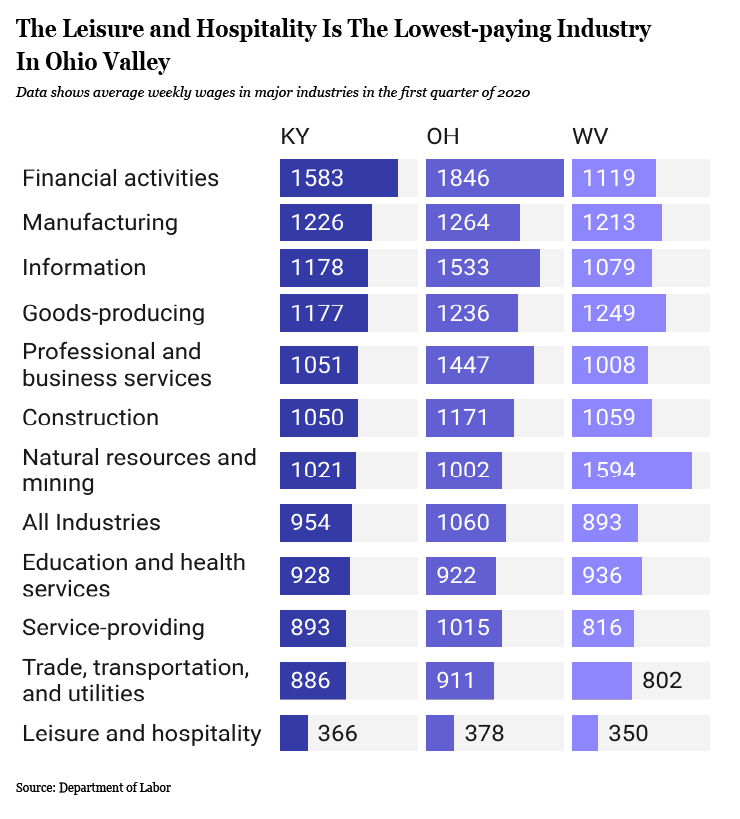 Researchers at the Washington Center for Equitable Growth, who studied the impact of the pandemic benefits, found that a longer duration of unemployment insurance benefits results in an increase in wages on re-employment.

“When people have resources to meet their basic needs while out of work, they can take the time they need to find the right job for them, rather than taking the first work opportunity that comes along,” the researchers said.

Other concerns include the lack of child care services keeping parents from rejoining the workforce, and the slowdown in vaccination rates creating economic uncertainty.

The Ohio Valley states would receive $2.3 billion in child care funding from the federal government that would be used to revive the child care industry that was upended by the pandemic forcing parents, mainly mothers, to quit jobs.