The Robsons, like the vast majority of U.S. households with children, began receiving the Child Tax Credit last week – the latest part of the American Rescue Plan to be put into action. Jaclyn Robson says it was sorely needed.

“I don’t want to have to work 60 hours a week just to make a decent wage,” Robson said. “I want to be able to stay at home with my kids more, but I don’t want to not work.”

The Robsons live in Buchtel, Ohio. Jaclyn works long hours as a direct support worker – often taking extra shifts to help them get by. Her husband, Harold Robson stays at home with their three young children, two of whom have autism and require extra care.

The American Rescue Plan, signed into law by President Joe Biden on March 11, 2021, was designed, in part, to help families like theirs. The package builds upon the mid-pandemic economic relief of 2020’s CARES Act.

The IRS grants yearly tax incentives to families for each child aged 17 and under. The advanced Child Tax Credit in the American Rescue Plan increases the amount families receive and provides early payments from the IRS of 50% of the estimated amount that families can claim on their 2021 tax returns. Families received the first payments Thursday, July 15.

The families of around 60 million children qualify for receiving the Child Tax Credit. Married couples with a combined income of less than $150,000 and single parents with an income of less than $112,500 qualify for the credit. That means every family living below the poverty line qualifies, as a family of three is considered impoverished if the annual income is less than $20,832. Nearly 11 million children fall under that definition, a third of all Americans living in poverty. In total, 88% of children in the U.S. are set to benefit. 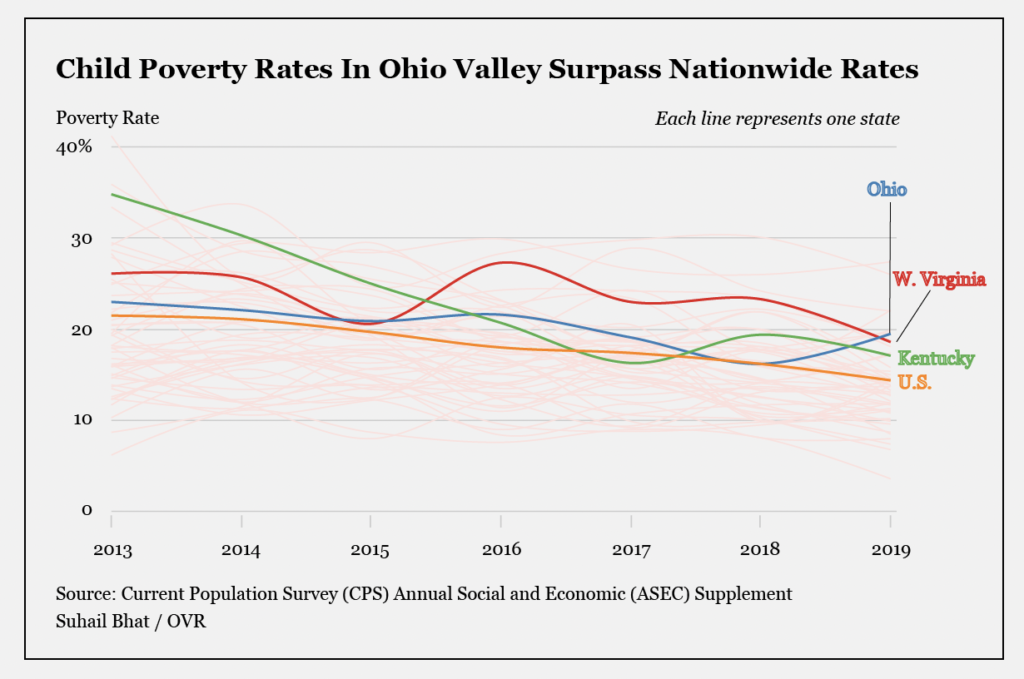 Although Ohio’s child poverty rate of 18.4% is lower than that of Kentucky and West Virginia, it’s higher than the nationwide rate of 16.8%. 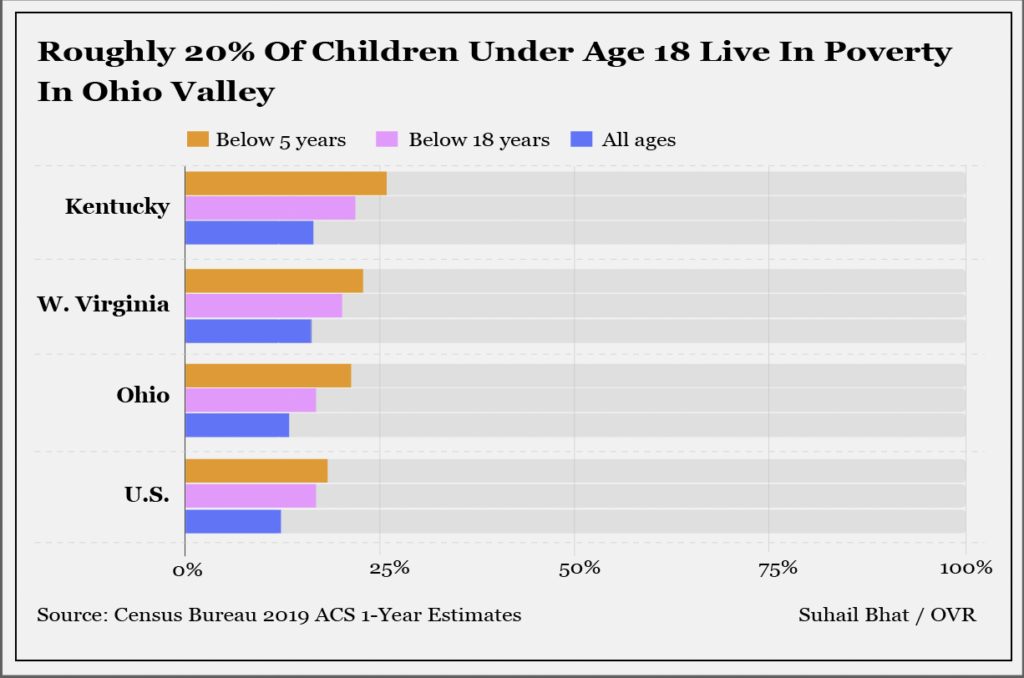 The problem is more pronounced in coal country, like east Kentucky and West Virginia. Nearly half of the children below 18 are under poverty in Kentucky’s Robertson, Harlan, Clay, Leslie, and Nicholas counties. In West Virginia, McDowell County, one of the poorest counties in the country, nearly 45% of kids under 18 live in poverty –– that is the highest in the state. In Ohio, Guernsey and Scioto counties, which also produce coal, have more than 30% child poverty rates. 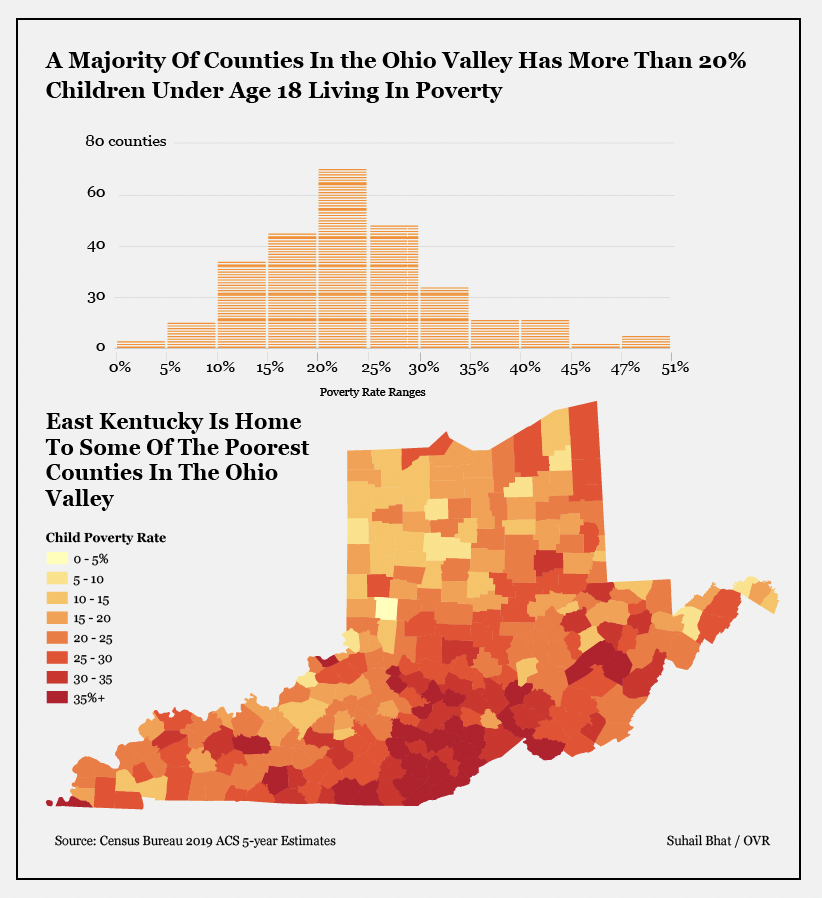 That means worse outcomes for children in those areas. Research shows kids living in poverty are less likely to succeed in school, face malnutrition and report high levels of stress.

“The biggest anti-poverty program in decades”

Some have argued the expanded Child Tax Credit under the American Rescue Plan is the biggest anti-poverty program deployed by the federal government in decades.

Biden spoke at the White House last Thursday to celebrate the launch of the payments.

“It’s our effort to make another giant step toward ending child poverty in America,” Biden said. “I think this is one of the things that the vice president and I will be most proud of when our terms are up.”

Experts expect the improvements in the Child Tax Credit will pull millions of kids out of poverty. Researchers at Columbia University’s Center on Poverty and Social Policy estimate that the American Rescue Plan would likely cut child poverty by more than half.

Families qualify based on their 2019 or 2020 tax filings. Those who did not file taxes and still wish to receive the credit may fill out a form on the IRS Child Tax Credit portal.

Jaclyn Robson says while the credit isn’t enough to live off of, it’ll make a big difference for her family and families like hers. They plan to use the funds for new school clothes for the children and potentially vehicle repairs. She says later in the year it will help families give their children a nice Christmas.

“I hope that [the federal government is] wanting to make sure that kids are able to get things that parents can’t typically afford or allowing parents to be home more so kids aren’t struggling emotionally,” Robson said.

Further information about the Child Tax Credit can be found at www.whitehouse.gov/child-tax-credit.