The commission denied the company permission to make wastewater treatment upgrades at the plants and pass the cost on to electric power customers in the state.

Not making those upgrades would require the plants to close in 2028, under U.S. Environmental Protection Agency rules.

It also approved similar upgrades to the Mitchell plant in Marshall County, which is jointly operated by Wheeling Power and Kentucky Power.

West Virginia customers will start to see a slight increase on their bills next month as a result.

Still, the decision by Virginia regulators casts doubt on whether the projects at Amos and Mountaineer will move forward.

Regulators in Kentucky in July rejected Kentucky Power’s portion of the upgrades to Mitchell.

It’s unclear if the wastewater projects at all three plants can be completed with only West Virginia customers paying for the cost.

In a statement, Phil Moye, a spokesman for Appalachian Power, said the company would use the same approach to all three plants.

“Our next steps will be to evaluate our options in light of the conflicting Virginia and West Virginia state commission orders, determine the best path forward to meet the resource needs in each state, and return to the commissions if necessary for consideration of our updated costs and plans,” he said.

American Electric Power, which owns all three plants, has set a goal of cutting its carbon dioxide emissions by 80% of 2000 levels by 2030. Closing the three West Virginia plants and replacing them with cleaner sources of electricity would help the company achieve that goal. 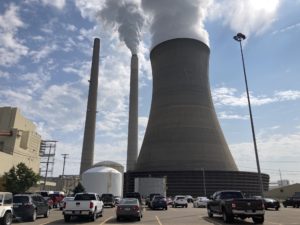 The company argued in all three states that upgrading the plants was better for ratepayers than finding replacement capacity.