Donate Now!
More Ohio Valley Children Are Becoming Severely Sick With COVID-19. Pediatricians Are Worried About What Lies Ahead

More Ohio Valley Children Are Becoming Severely Sick With COVID-19. Pediatricians Are Worried About What Lies Ahead

For nearly a year and a half, Kaja Lowe didn’t feel comfortable letting her kids out into the world.

She took all the precautions. Early on in the pandemic, she would get groceries delivered to her car before spraying them down with disinfectant. Later, she made sure her family wore masks and sanitized their hands after going out in public. And as essential workers, both she and her husband got vaccinated in February, as early as they could.

With the delta variant of the virus surging this summer, Lowe was pleased her sons’ school district — McCracken County Schools — was one of the few in western Kentucky to require students, staff and teachers to wear masks indoors.

But it didn’t matter.

After only a few days of in-person school in early August, her eight-year-old son Sitri fell ill with a fever over 103 degrees, gasping for air and struggling to breathe. A test the next day confirmed it was COVID-19.

“He said it felt like somebody was sitting on his chest,” Lowe said. “He would go to take a big breath, and he couldn’t. And the biggest breath he could muster up made him just cough incredibly long and hard.”

Over the next few days, Sitri’s energy faded, his fever skyrocketed and he struggled to breathe at night. Her seven-year-old son Lucian contracted the virus as well.

Eventually, both boys fully recovered on their own. Lowe said she’s not exactly sure how they contracted the virus, whether from school or a recent family trip to Arizona.

But kids have been contracting the virus since the beginning of the pandemic. In Kentucky, Ohio and West Virginia, there have been at least 250,000 cases of coronavirus among kids and teens 19 years old and younger. And the rate of infection has only increased since the onset of the delta variant of the virus.

Pediatricians from across the Ohio Valley say this new wave of COVID-19 is sickening children with severe symptoms that require hospitalizations, as school districts continue to try to maintain in-person learning without closures. Hospitals in the region are also reporting capacity strains, and children’s hospitals are concerned about having enough space and staff to treat children who get transferred from remote areas. 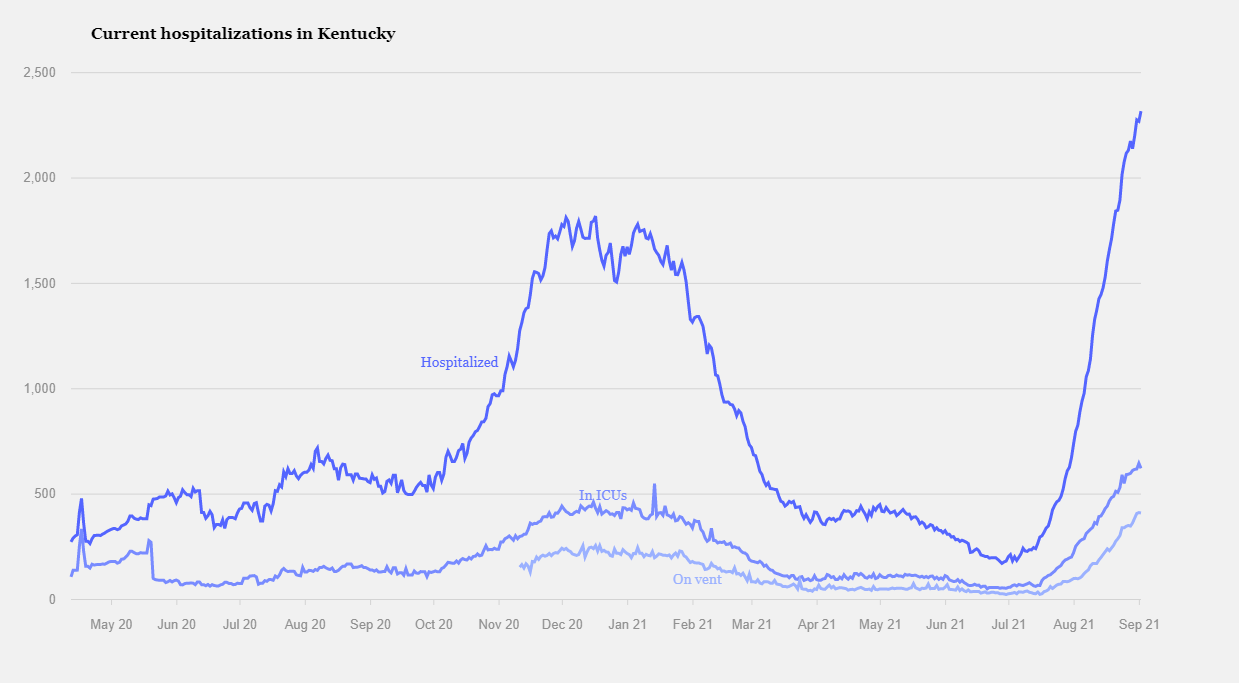 Kentucky’s hospitalizations due to COVID-19 have dramatically spiked due to the delta variant of the virus.

A year ago, if you had asked Dr. Matthew Bacon if he was worried about COVID-19 infections in kids, he would have been comfortable saying no. But the interim division chief for pediatric critical care at Kentucky Children’s Hospital in Lexington has a different answer today.

“Now with the Delta variant — this is absolutely affecting children. We are absolutely admitting more and more children to our children’s hospital. And unfortunately, some of those get critically ill and need to come to the ICU,” Bacon said.

Bacon said the hospital’s capacity is strained but has not turned any patients away.

When children’s COVID-19 symptoms require them to be hospitalized, Bacon said two types of disease or symptoms show up. Respiratory disease is one.

“So kids will get really short of breath. If we hook up pulse oximeters up to them, their saturations will be very low,” he said. “And they feel really rundown, and kind of overall working very hard to breathe.”

Depending on the severity of the respiratory symptoms, kids may need to be hospitalized or admitted to a pediatric ICU, Bacon said. Treatments include steroids, FDA-approved remdesivir for children over age 12 and blood thinners.

“And other than those two, three therapies, the treatment is largely supportive care,” Bacon said.

The other complication kids can get from the virus is called multisystem inflammatory syndrome in children, or MIS-C. Bacon said the disease is still considered to be rare, but Kentucky Children’s Hospital has seen between 25 and 30 cases.

MIS-C can cause inflammation in multiple organs: the brain, eyes, gastrointestinal organs, heart, kidneys, lungs and skin. It can be deadly, but most children recover with treatment. Yet, the Centers for Disease Control and Prevention don’t know the cause of the disease.

Bacon said it will take a couple of weeks to know if the hospital has seen a surge of MIS-C cases.

“That typically happens two to four weeks after a surge in cases, and we aren’t even quite there yet in this surge,” he said.

All of the children Bacon has treated with COVID-19 have one thing in common — none of them are vaccinated.

“To my knowledge, still, we have not admitted a child to the Children’s Hospital in the age group of 12 to 18 that has been vaccinated,” Bacon said. 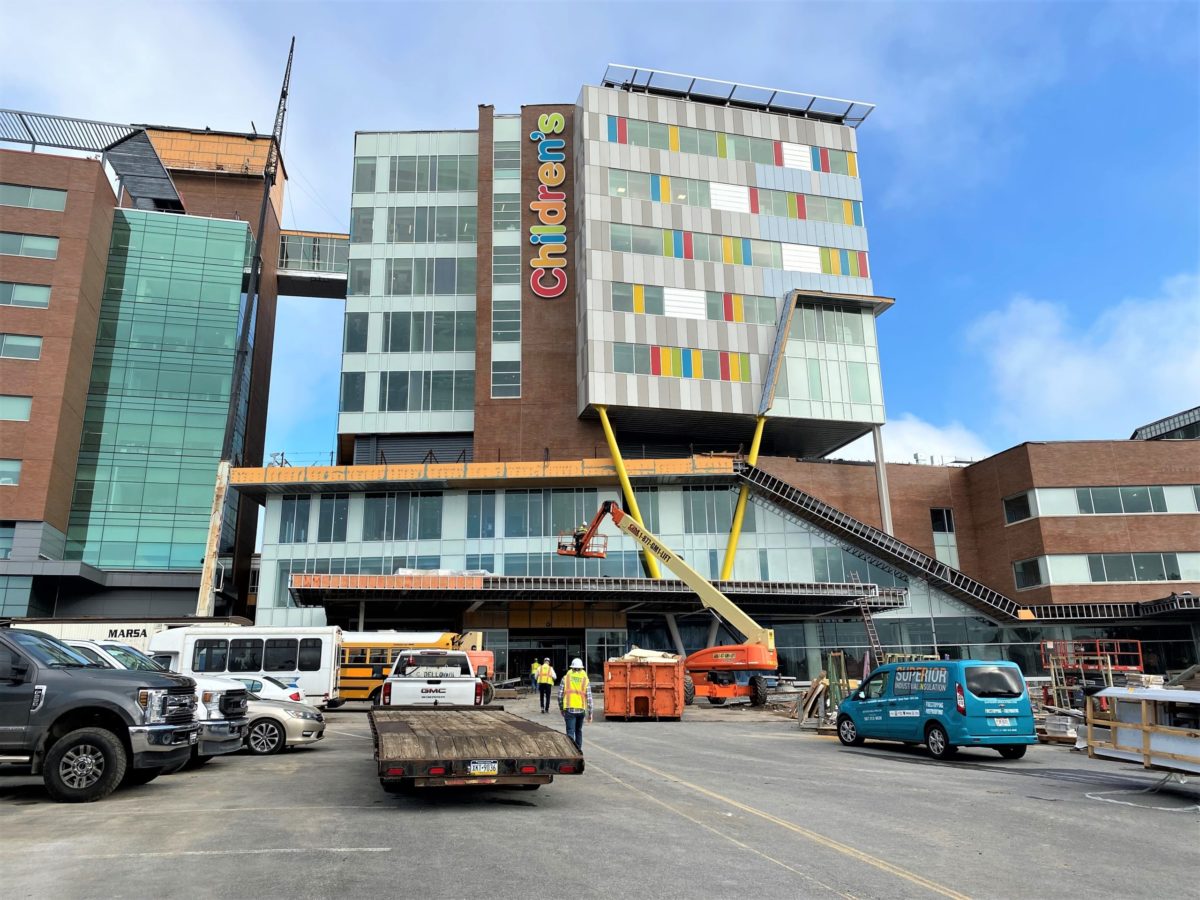 The construction of a new children’s hospital for WVU Medicine.

“None of the teenagers who are eligible to be vaccinated were vaccinated. None,” Moffett said.

WVU Medicine Children’s Hospital has had COVID-19 patients ranging from newborns to 18 year-olds. Moffett said babies have not been very ill and recover quickly. But for the past six weeks, the number COVID-19 infections has increased and they’ve seen more sick teenagers.

“Almost all have had risk factors of either asthma, obesity, underlying chronic conditions — I would say that the majority it’s obesity,” she said.

“She had asymptomatic COVID, but she had MIS-C,” Moffett said. “She developed myocarditis and then did not recover from her illness.”

Moffett says there were between 15 and 20 patients admitted to the children’s hospital’s 22-bed unit in August.

“I mean, that’s a lot. That might not sound like a lot when we’re talking about hundreds of adults. But for children, that’s a significant number of kids,” Moffett said.

For rural parts of the Ohio Valley, children with severe cases of COVID-19 are often sent to large hospitals in urban centers because they can receive more specialized, around-the-clock care.

The two hospitals in Paducah, Kentucky — near where Kaja Lowe lives — generally have to transfer children who have severe reactions to the virus elsewhere.

Nanette Bentley, a spokesperson for Mercy-Health Lourdes Hospital in Paducah, said the facility doesn’t have a pediatric intensive care unit or pediatric surgeons and specialists.

The hospital typically admits pediatric patients if they need a lower level of care, like treating dehydration with IV fluids or respiratory conditions with antibiotics. 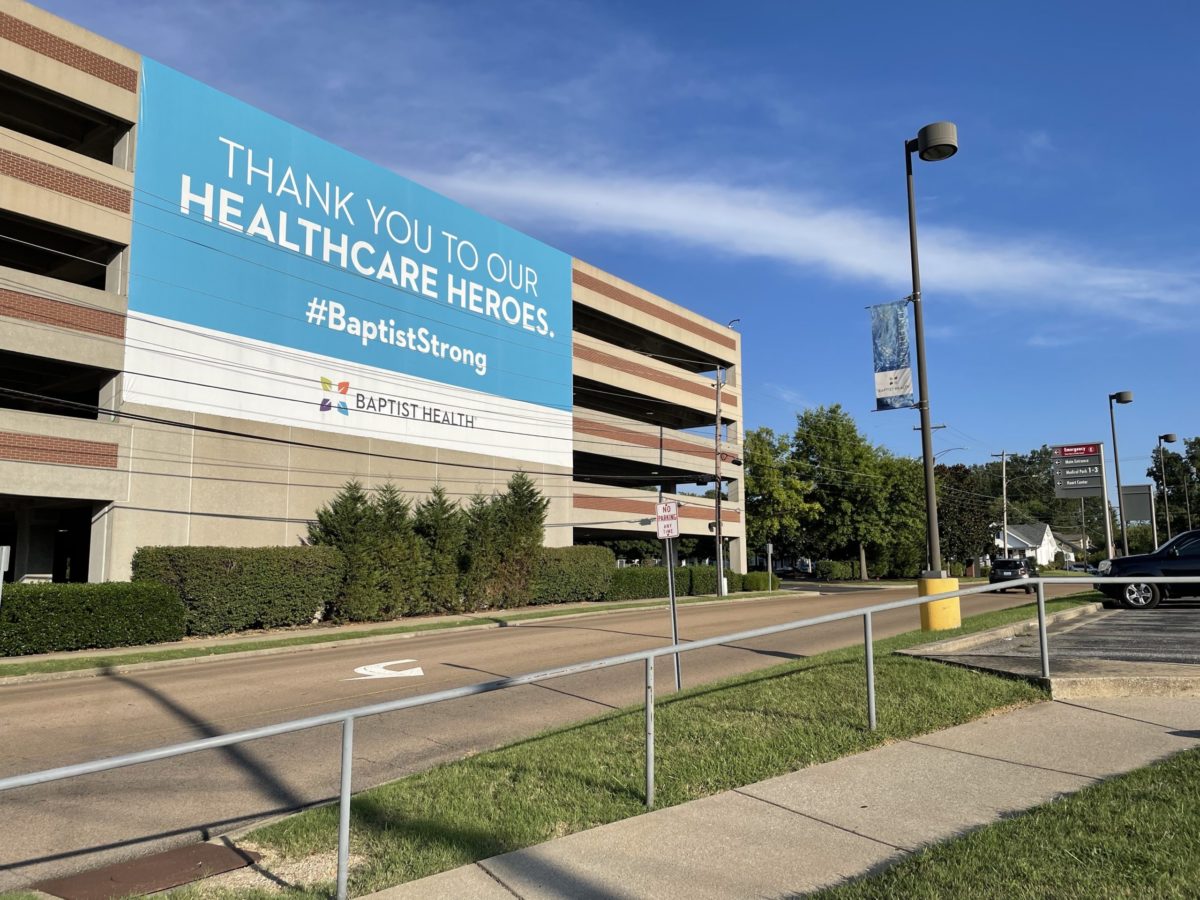 Baptist Health Paducah has inpatient pediatric services and a neonatal intensive care unit for infants, the only NICU for residents within an hour’s drive. But the hospital doesn’t have the resources to treat kids with severe cases of coronavirus.

Laken Lasher, a NICU nurse at Baptist Health Paducah, said the hospital hasn’t seen a surge of babies needing treatment for COVID-19, but many NICUs have been dealing with a surge of respiratory syncytial virus that normally affects infants in the winter.

“The hospitals are, they’re slammed and I don’t think people realize that this variant is affecting so many children,” Lasher said. “We don’t have a lot of pediatric beds and we don’t have the staff to take care of it. So, if your child was to need a ventilator, we get you shipped out.”

Lasher said children with more severe cases would get transferred to children’s hospitals in larger cities like Nashville, Louisville and Lexington if space is available.

She said she is worried about her own four-month-old getting severely sick with the virus.

“I work in it. And I know that my child, if he needs some form of oxygen, more than just a little nasal cannula — which he probably will — will end up in the back of an ambulance or in a helicopter off to a different facility,” she said.

As more children and others are sent to hospitals in larger cities, some health experts are worried about strains on capacity at specialized facilities. Some hospitals in the Ohio Valley are already implementing disaster plans and setting up tents outside to handle overflow capacity.

Dr. James Gaskell, health commissioner for the Athens City-County Health Department in southeastern Ohio, said children’s hospitals in urban areas are worried about what will happen when coronavirus cases peak while they also deal with RSV cases in infants and toddlers.

“There are lots of little communities out there that are sending their kids to Children’s Hospital in Columbus or Children’s Hospital Cincinnati,” Gaskell said. “The problem is if the coronavirus continues to impact kids — and they know this — they’re very concerned about capacity, the ability to handle all the kids that might arrive.”

What A Community Lost

Travis Holder posts Ballard County, Kentucky’s coronavirus numbers almost every day on Facebook — the raw data for new cases, deaths and hospitalizations, along with the ages and genders of those affected by the virus.

As the emergency management director for the county with a population of less than 8,000, he says it’s a reminder that the pandemic is impacting Ballard County — including its children.

“Each one of those numbers is a human being, a breathing body,” Holder said. “You kinda have a wonder in the back of your mind what they’re going through.”

Like elsewhere across the Ohio Valley, Holder said he’s seen the number of cases drastically increase as the virus affects younger and younger people. He says it’s scary for him because he’s a father of three kids. Two of them were recently quarantined due to potential COVID-19 exposure.

Ballard County has had a loss to COVID-19 that other Kentucky communities haven’t experienced: 15-year-old Alexa Veit passed away after being flown to a Nashville hospital last November. Kentucky health officials report only one death in Ballard County among those ages 10 to 19. 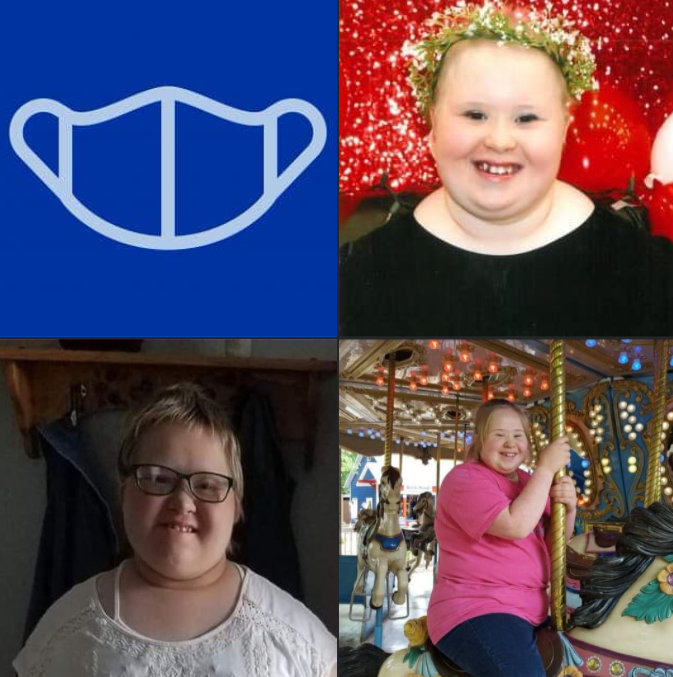 Holder knew her family in the tight-knit community, and he wrote the news release to the public when she died.

“We’ve heard that, you know, it’s gonna affect more of the older generation, more vulnerable people,” Holder said. “For something like that to claim the life of a 15-year-old is devastating.”

Holder said after Veit’s death, some in the community came together and took pandemic precautions more seriously, but the county is now experiencing an even more intense wave of the virus. Ballard County and neighboring western Kentucky counties have consistently had the lowest county-wide vaccination rates in the state.

For Kaja Lowe, who lives in neighboring McCracken County, the idea of losing a kid is unimaginable, especially with vaccines becoming increasingly available.

“But this, especially being…let’s say 98% avoidable, it’s something that as a parent, you should never even have to go through,” Lowe said.