Donate Now!
No Shelter: Eviction Protections are Latest Safety Net to Erode, as COVID-19 Rages On

No Shelter: Eviction Protections are Latest Safety Net to Erode, as COVID-19 Rages On

In room 226 of the Relax Inn in Richmond, Kentucky, Melanie and Cody Poore do their best to make themselves at home. Melanie has draped some of her old comforters over the motel’s thin bedcovers, and Cody keeps the minifridge stocked with energy drinks he likes.  Beyond the walls, traffic rushes by on I-75; both inside and outside the robin’s egg-blue building, there’s a feeling that this could be any interstate exit in the country, any roadside motel for weary travelers to sojourn on their way from someplace to someplace else.

But for Melanie and Cody, the Relax Inn was not a one-night stop.  They had been in limbo for over a week, since they were served an eviction by their landlord.

How Covid Put a Family in Financial Crisis

It all started to fall apart this summer, Melanie said, when her kids were exposed to COVID-19.  The whole family had to quarantine, and by the time they were in the clear, Cody’s landscaping job shut down.

“We had to quarantine because somebody at work ended up getting it,” Cody said. “Then somebody else got it, had to quarantine… Been off work for a month and a half now.” Cody got a second job at a local restaurant to cover lost wages, but they soon shut down, too.

After about two weeks in the motel, Cody and Melanie were able to find a rental to move into. But housing and legal advocates say their predicament is common across the region, and evictions have increased in recent months.

The Poores escaped the worst of the early pandemic.  Melanie still had work, and when she left, she was cushioned from free-fall – stimulus checks, unemployment, and the eviction moratorium kept the family stable. But gradually, these protections were revoked.

In the weeks since, some Ohio Valley families like the Poores have been caught in the crosshairs of the pandemic, the eviction moratorium is the latest lifeline that’s been stripped away.

Housing advocates and those on the front lines of the local eviction courts in the Ohio Valley say the current housing crisis is only compounded by the lack of affordable housing across the region, with the threat of COVID-19 and the long-term impacts on mental health impacts on those evicted remaining to be seen.

Hearings Since the Moratorium’s End

Inside the local courthouse in Athens County, Ohio, the judge, speaking through a red mask, asks the plaintiff what they really want to see out of the case.

“Looking for them to be out,” the plaintiff said. 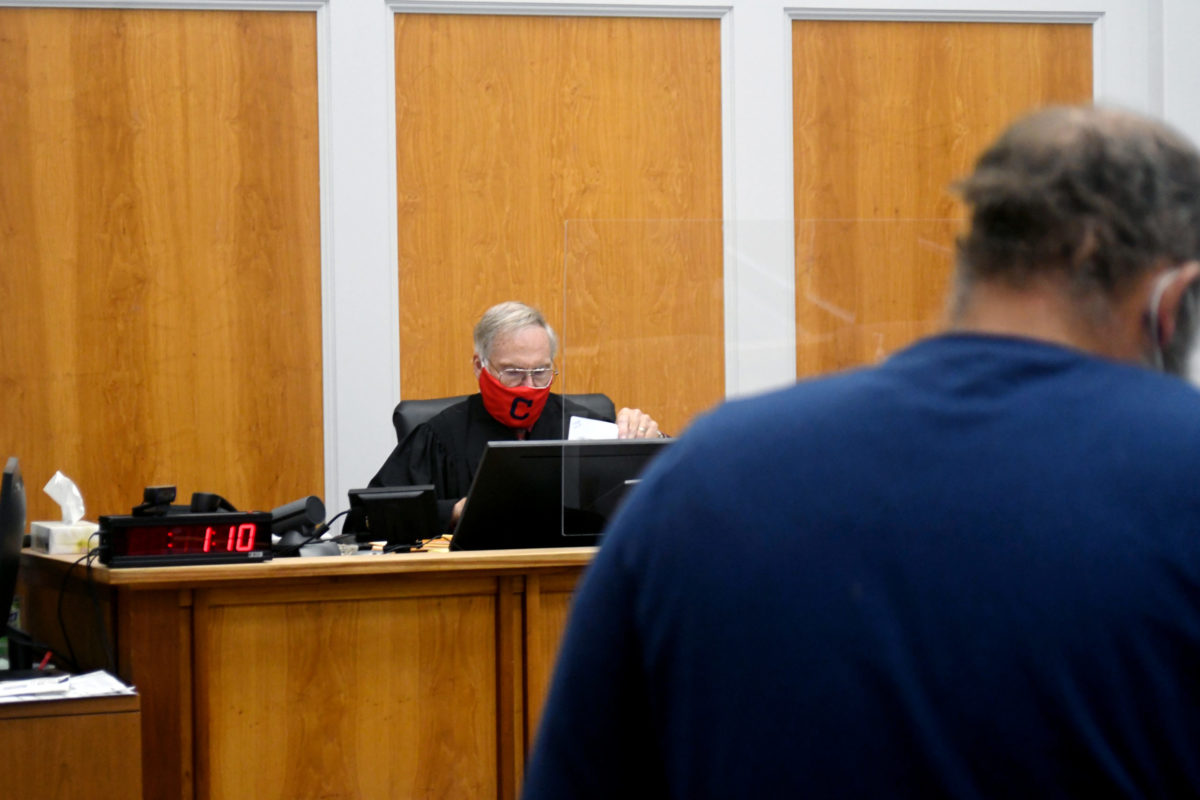 The local judge in the Athens County Municipal Courtroom, with an eviction case defendant in the background.

For Caitlyn McDaniel, it’s another eviction case she’s arguing for clients in the Athens County Municipal Court. Responding to pandemic conditions, she and other legal aid attorneys with Southeastern Ohio Legal Services (SEOLS) have set up clinics in various eviction courts across the region to provide representation to low-income residents.

In Athens County Municipal Court, her clients are currently trying to receive rental assistance funding from the Hocking-Athens-Perry County Community Action, one of the regional agencies that distributes emergency relief funding provided by the state. She tells the judge that her client’s rental assistance application hasn’t yet been approved, because that would require participation from the landlord.

Eviction cases had generally decreased in past months with the moratorium in place, she said, but that changed when it was lifted in late August.

Evictions Had Already Been Happening

Some advocates feared that when the eviction moratorium was lifted, a sharp rise in cases would overwhelm legal aid and social services.  That hasn’t quite been the situation, but not because cases haven’t risen.

Rather, according to Kristen Lewis, who chairs the SEOLS Housing Team, some local eviction courts had begun processing eviction cases in August after the CDC’s broader eviction moratorium had expired on July 31. That policy was extended by another moratorium that was supposed to last until Oct. 3, but was legally contested from the start, and ended by the Supreme Court on August 26.

“Regardless of what the CDC was going to do,” Lewis said, “they were not going to necessarily honor any further extensions,” Lewis said.

In Ohio, 5,510 eviction cases total were filed in August, according to state court data. In September, the total increased 22% to 6,747 filings. That translates to maybe a couple of dozen cases in a rural place like Scioto County, Ohio, and to hundreds of cases in urban areas like Cincinnati. 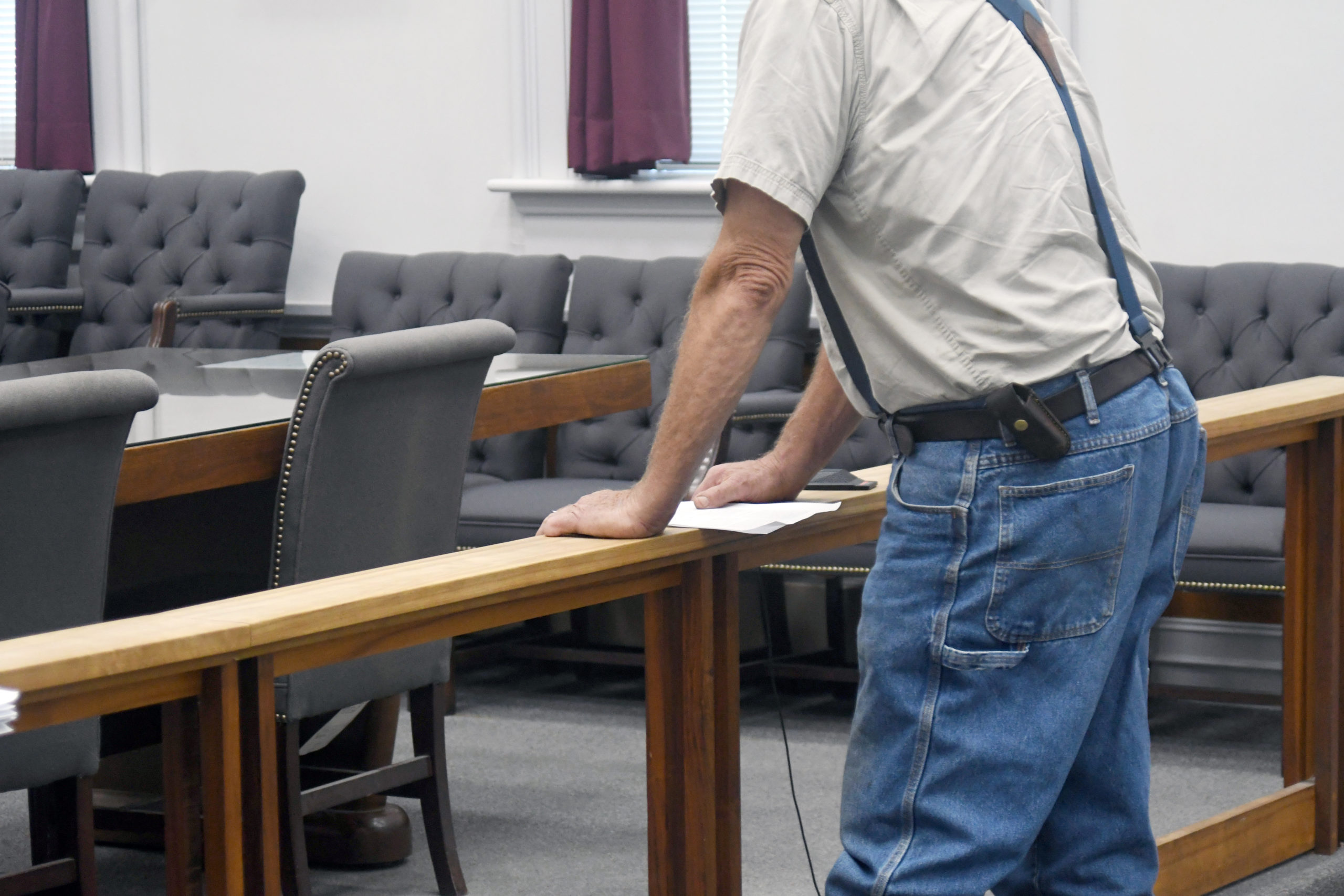 A local landlord at an eviction case hearing in the Athens County Municipal Courtroom.

The increase in evictions is a problem compounded by a lack of affordable and available housing across the region, particularly in rural areas. Housing advocacy organizations cite statistics showing Kentucky, Ohio and West Virginia lagging in hundreds of thousands of needed rental units total for potential tenants. “There’s no available housing out there right now,” Lewis explained, “so, it’s taking tenants longer to find new housing when they’re in a situation where they absolutely have to move.”

The eviction cases being processed through the courts, Lewis said, are also only a partial snapshot of tenants being threatened to leave housing.

And for tenants facing the eviction court process, the pandemic is still a looming concern. Lewis said some tenants who have tested positive for COVID-19 have had to appear in court, potentially exposing others, because they couldn’t get a continuance on their case.

Megan Hatch, an associate professor at Cleveland State University in Ohio, studies the health impacts of eviction. She said that even if eviction is a one-off event in someone’s life, its impact reverberates for years.

“Sheltering in place, staying at home, working from home, school, from home, all of that, well, that only works if you have a safe, healthy, secure place to live,” Hatch said. “And if you don’t, for whatever reason, then it makes it hard to prevent the spread of COVID.”

Evidence suggests the lifting of eviction moratoriums in earlier stages of the pandemic led to more COVID-19 spread and deaths.

Twenty-seven states— including Kentucky and West Virginia— let eviction moratoriums expire between March 2020 through September 2020. A study, led by public health and legal experts at universities across the country, found that those states saw 430,000 more cases and over 10,000 more deaths than if they had left moratoriums in place. The CDC implemented its first federal eviction moratorium in September 2020.

Representatives of the Kentucky Housing Corporation, which administers the Kentucky Healthy at Home fund, estimate that at the current pace, they will have rental assistance available through 2024. They spend a little over $5,000 per client, which covers all back rent and three months of forward rent.

Landlords and tenants are encouraged to apply together.  But, according to Margaret Sites, the AppalRED Legal Aid lawyer who has been working with the Poores through their eviction, landlords don’t always accept rental assistance, as was the case for the Poores. For them, the money goes towards their next living setup. 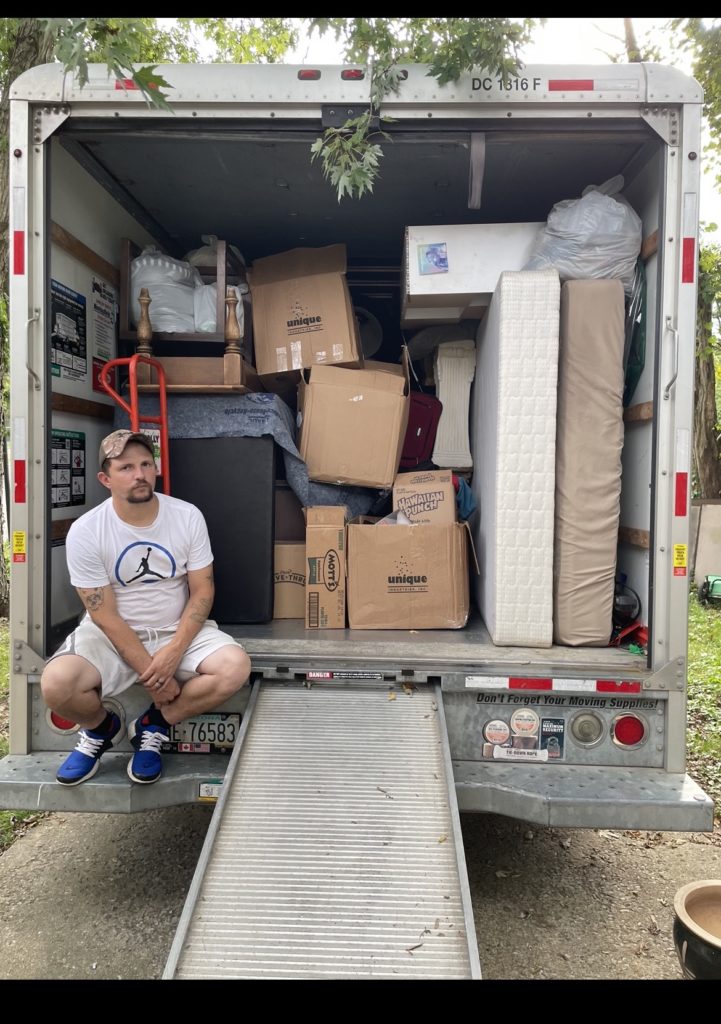 After the eviction, the Poores kept their possessions in a U-Haul for days, until they could find a storage unit.

“We know we have the money to get in someplace,” Melanie said back at the motel, “but who’s gonna accept it?”

By her telling, the couple tried unsuccessfully to get into seven homes. Many applications required high credit scores, landlord references, and a clear eviction record, all of which disqualified the Poores.  Continued rejection was not just stressful but also costly—  the family had to pay an application fee each time,  around a hundred dollars per home.

One landlord almost accepted the couple, but, Melanie said, stopped responding after learning they would be using assistance to pay rent for a few months. If they weren’t careful, she feared, all of the assistance funds could end up getting spent on application fees, a storage unit, and the motel room.

Much has been made of the labor shortage and abundance of for-hire signs, which Cody says he sees everywhere when he bikes around Richmond.  But he’s hesitant to apply. “I don’t know what job to take, because we might be in Berea next week,” he said. And he doesn’t have a car.

Cody sat next to Melanie on the thin sheets of their motel bed, as she scrolled through pictures of their moving day.  For a moment, they were quiet, their necks craned together over her phone, remembering how quickly their lives had changed. Even though they found a rental, the experience shook them deeply. 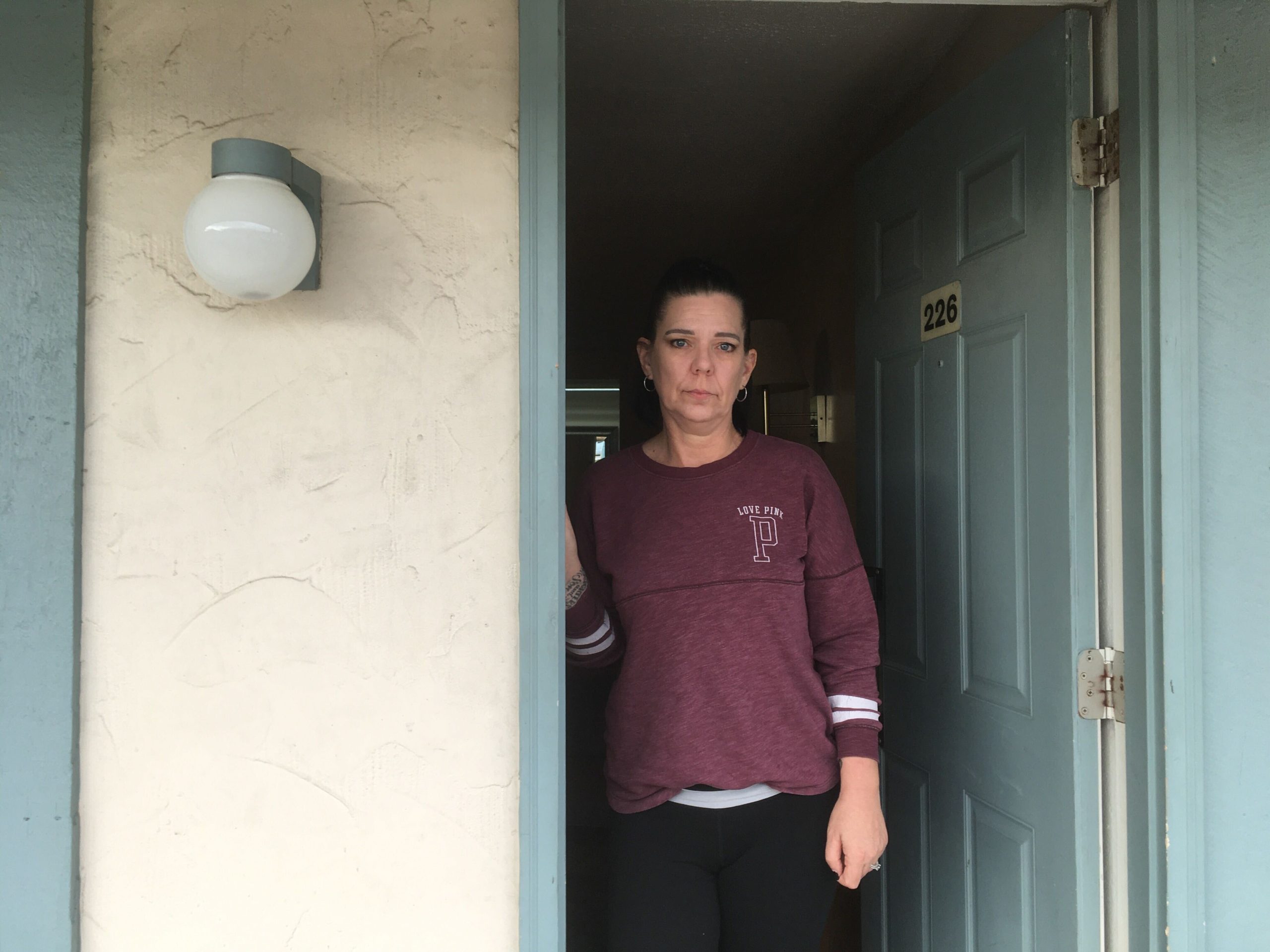 Melanie Poorelooks out from her room at the Relax Inn in Richmond.

“It’s like a rollercoaster,” Cody Poore said that day.  “One minute, you got a roof over your head. Your kids just got what they need. Your wife’s got what she needs. You’re doing okay, you’re working paycheck to paycheck, but you’re staying afloat. And then you’re just here … you don’t know what the next day is going to bring.”