Kentucky Court Orders Justice to Pay Penalty Over Mine Reclamation

A Kentucky court has found coal companies owned by West Virginia Gov. Jim Justice in default of a 2019 mine reclamation agreement.

A judge in Frankfort on Tuesday ordered Justice to pay a nearly $3 million penalty, plus interest, over mine reclamation work at three sites in eastern Kentucky that was not

The judge revoked five of Justice’s permits, including some at mines he’d planned to reopen.

Justice also must pay attorneys fees to the state Energy and Environment Cabinet.

Attorneys for Justice had argued that the coronavirus pandemic made it impossible to meet the deadlines for completing the reclamation work.

The state countered that at least one of the deadlines passed before COVID-19 had widespread impacts and that one site had been left untouched for years.

Justice’s attorneys also tried to persuade the court to reduce the penalty based on work completed and to set aside the 8% per day interest rate it had agreed to pay.

“The Cabinet, nor the Court, has any obligation to continue to grant Defendants leniency,”  Franklin Circuit Judge Thomas Wingate wrote in his 21-page order Tuesday.

Both Justice and his son, Jay, were named as defendants in the case

.A spokesman for Justice didn’t respond to a request for comment.

An NPR investigation in 2016 found that Justice’s coal companies owed $15 million in taxes and safety penalties across six states, including nearly $7 million in Kentucky. 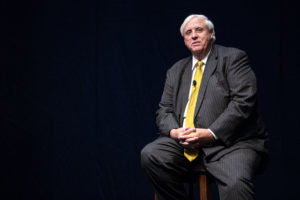