On a chilly fall morning deputies with the Athens County Sheriff’s Office reported for annual training in Nelsonville, OH. Sitting among bullet proof vests and diagrams of guns and safety measures, the officers’ weapons remained holstered. Instead of target practice, this morning officers wore virtual reality headsets to watch  interactions between law enforcement and community members.

“This is brand new to all of us,” Deputy Aaron Maynard, of the Athens County Sheriff’s Office said. “The application (VR) can be used in so many ways. I’ve been doing this for over 20 years in law enforcement and there’s nothing like this.”

Maynard led the training, explaining the new technology to the officers. Each deputy sat at a table with props from the videos, in an effort to bridge the gap between VR and reality. 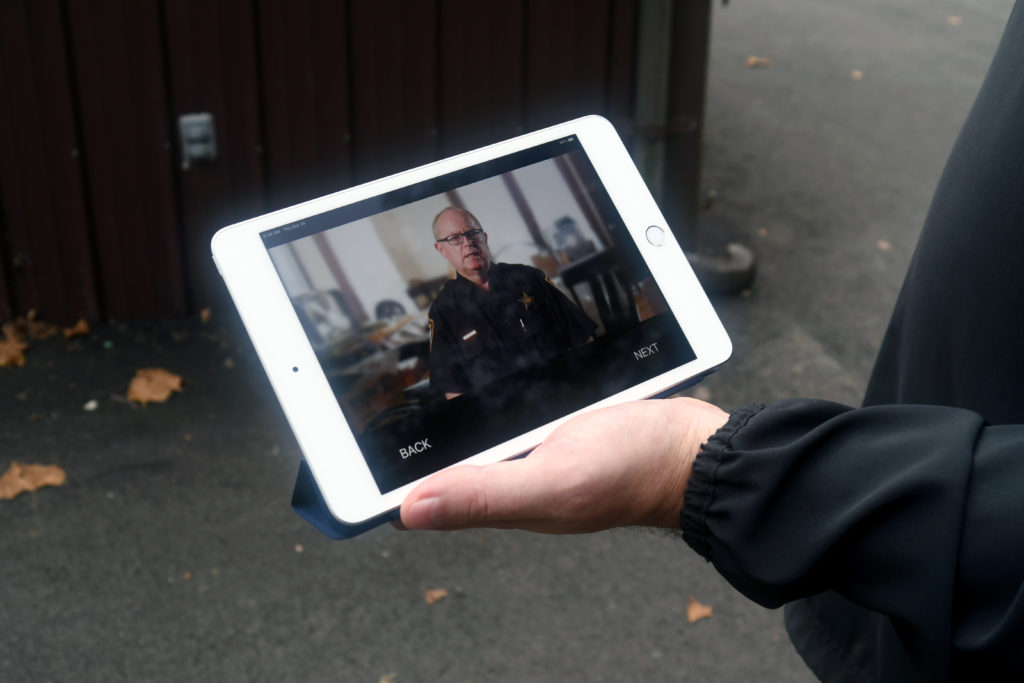 Each VR scenario is preceded by a video that describes what the participants are about to experience.

Currently, there are two experiences available to the officers. The first dealing with a person going through a mental health crisis that is potentially at risk of self-inflicted violence, and the second dealing with a young Black man interacting with white officers, showing how one poor interaction can shape future encounters.

The VR training program is courtesy of the Appalachian Law Enforcement Initiative, a partnership between Ohio University’s Voinovich Academy for Excellence in Public Service, Scripps College of Communication and members of the law enforcement, mental health care communities, as well as public administrators.

John Born, executive-in-residence at the Voinovich School and Scripps College of Communication says the project was created to address the lack of what he calls “soft skills” training, the skills that law enforcement personnel utilize when interacting with the community.

While interpersonal skills are honed by both mental health and emergency medical professionals, law enforcement often do not receive the same kind of extensive training in “soft skills.”

In Ohio, 737 hours of training are required to become a law enforcement officer. Only 32 of which are dedicated to those “soft skills”  that come into play during community interaction according to Roger Deardorff, commander of the Hocking College Police Academy in Nelsonville, OH.

“It covers the culture that we deal with, bias training, sensitivity training. Then we also get into ‘community policing,’ what can officers do to bring up their appeal to the community. We call it ‘building the bank.’” Deardorff said.

By comparison, in Kentucky and West Virginia 800 total hours are required to become an officer. In West Virginia, around 23 training hours are dedicated to specific soft skills topics with additional time being devoted to human relations during other course work.  All three states in the Ohio Valley are higher than the national average of 652 hours. Currently, there are no federal regulations on law enforcement training hours.

Though Ohio requires more training than the national average, some still question if the required hours are enough considering what law enforcement officers face on a daily basis. Last year, the Cincinnati Enquirer reported that Ohio requires barbers to train for 1,800 hours and licensed cosmetologists 1,500 hours, both over double the amount required of law enforcement.

The need for “soft skills”

In a scene from the Chet VR scenario, an officer speaks with Chet, right, during an intense situation. Click the photo to view the VR video.

The VR training is meant in part to help bring more sensitivity training to currently working law enforcement. It is the latest effort to work on de-escalation of situations involving law enforcement officers and the community. The program follows the wide-spread protests of 2020 surrounding the Black Lives Matter movement and the call for defunding police departments based on fatal shootings by law enforcement.

While the federal government does not track or report fatal police shootings, the Washington Post has a database dating back to Jan. 1, 2015. According to the database, there have been 373 fatal shootings by law enforcement in the Ohio Valley since that date, 123 in Kentucky, 187 in Ohio, and 63 in West Virginia.

The most recent victim of a fatal shooting involving law enforcement was Gary Wayne Bessler Sr., who was fatally shot on Nov. 3, 2021 outside of his home in Williamstown, KY. The family of Bessler have stated that he called 911 seeking help for a mental health crisis. Allegedly he was holding a sword on the front lawn of the residence when police arrived. He was shot three times before being taken to the hospital where he died. The incident is currently under investigation.

The death of Bessler is precisely what “soft-skills” training hopes to prevent. One of the scenarios available in the training involves a man named Chet who struggles with Post Traumatic Stress Disorder due to the tragic deaths of his young son and his wife within one year. In the scenario, two officers encounter Chet on the anniversary of his son’s death. The experience features how each officer handles the situation with the potentially suicidal Chet, going through the scenario twice, with different outcomes.

During the first run through, the officers enter the home of a knife-wielding and intoxicated Chet after his daughter called 911. The lead officer is aggressive with Chet, which escalates the situation, leading to the officer firing his weapon towards Chet. 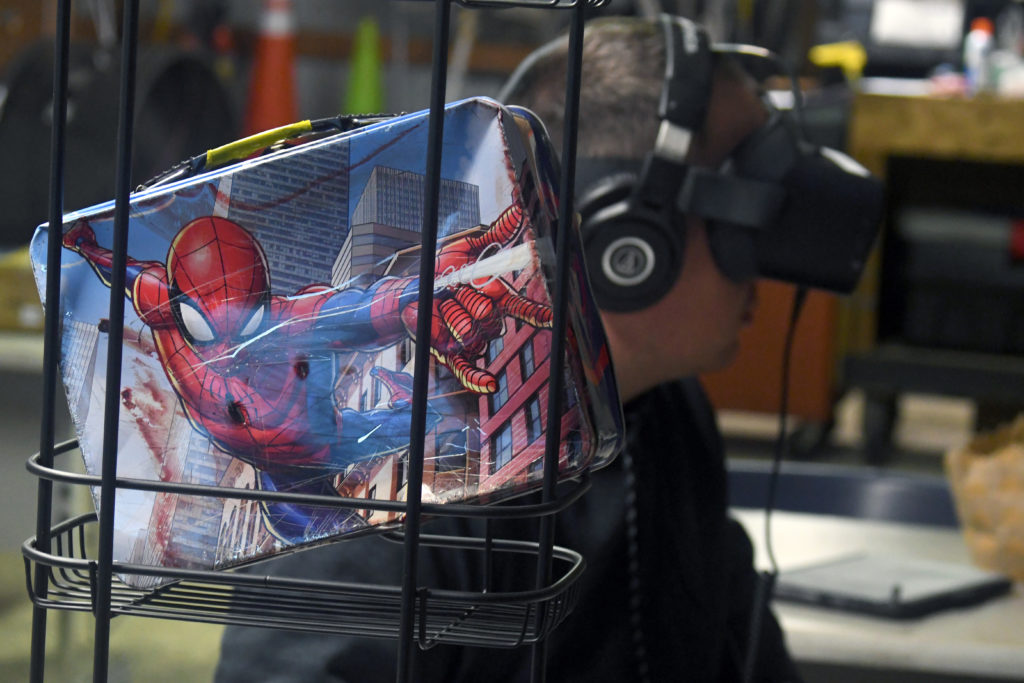 Props from each scenario are placed at the desks to help the officers relate more to the VR experience. Pictured is the Spiderman lunchbox that featured in the Chet scenario.

In the second run through the second officer takes the lead, approaching Chet with a calm demeanor and listening to what he has to say. He talks Chet into putting the knife down, giving him his late son’s lunchbox for comfort. Through compassion, he is able to get Chet to agree to speak with someone about the problems he is having. The video then wraps up by discussing the two scenarios, what worked and what didn’t, and how this can be applied in the day-to-day work of law enforcement.

When leading the training, Deputy Maynard encouraged the officers to observe all aspects of the experience.

“Everything is built in that we want you to learn and understand and pay attention to. Take it all in. Pay more attention instead of being zoned in on threats and something you’d normally be concerned with and have tunnel vision. We want you to be able to open up and look at the broad picture of what we’re trying to get done,” Maynard said.

The future of VR training

Though Maynard and Born are hopeful about the technology, some of the officers who have been through the experience are not quite sold yet, citing frustrations with having to turn in their chairs to see the interaction or the inability to participate in the experience by making choices and walking around like in certain VR video games.

“I think it’s a good start,” Detective Ryan Gillette said. “There are probably better ways and better scenarios in which to use that kind of technology. I agree that this is something that you could watch on a screen in front of everybody and get the same type of experience.”

Feedback like  Gillette’s, is what the Initiative is looking for, good or bad. The project will be in the beta phase over the next year. According to Born the VR training will be made available to all of the law enforcement departments within Athens County, OH, as well as several other public safety organizations in the area. The feedback from the trainings will be used to make adjustments to the program as needed.

In a scene from the Dion VR scenario, an officer is more aggressive with Dion, center, leading to Dion’s distrust of law enforcement. To view the VR experience, click the photo.

After the beta phase, the VR training will be delivered to law enforcement departments, starting with departments closest to Athens County, then according to Born, moving outwards in a circle. The training comes at zero costs to the departments, all of the equipment is provided by the Initiative and the VR program does not require an internet connection, allowing for the training to take place in rural parts of Appalachia that might not have internet access.

Born believes that Appalachian law enforcement agencies are often less likely to receive priority for training than other departments, putting both officers and the community which they serve at a disadvantage.

“I can tell you that many of the agencies seem to be last in line for training resources and funding. So I think it’s important to show that Appalachia can lead not only in technology but in proof of concepts,” Born said.

The Initiative hopes that eventually all of Appalachia will receive the training, and perhaps eventually take the program nationally.