In New River Gorge National Park, Fire Is Part of A Healthy Forest

It’s an unseasonably mild day in December, and from a parking area on the edge of the New River Gorge, you couldn’t tell there had been a wildfire near here just days earlier.

As we make our way down a steeply sloped trail, we encounter some young rock climbers who seem hardly bothered by what just took place here.

Then it hits your nose. It’s the smell of a smoldering campfire. And once you’re inside the zone, it doesn’t go away. The ground is black and ashen. Scorched tree stumps and branches are everywhere.

This wasn’t a big fire compared to the ones that happen out west. It affected 132 acres. The New River Gorge National Park and Preserve encompasses 70,000 acres.

No one was injured or killed here, and there was no significant property damage.

In fact, our National Park Service guide, Dave Bieri, said the fire was beneficial to the forest.

“As you can see, there’s not really there’s a little bit of black on a few of the trees here, but almost all of its ground level,” he said. “So springtime comes and all the new growth pops up, you’re not even gonna be able to see there was a fire here unless you really look close, I think.”

Biery said fire can help control invasive species that crowd out native plants. It can also reduce the amount of fuel on the forest floor, making it easier to contain future fires or making them less destructive.

That’s a change in strategy. For the better part of a century, it was thought that fires should be put out. In recent decades, fires have been set intentionally, including in the New River Gorge. 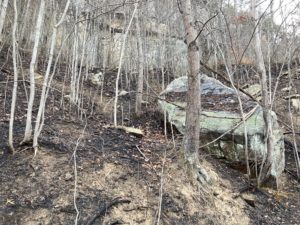 A steep slope scorched by wildfire in the New River Gorge National Park and Preserve on Dec. 10, 2021.

Prescribed burns aren’t the only tool available for managing forest fires. The fire zone in the New River Gorge included Nutallburg, a coal mining camp that was active from the 1920s to the 1950s. Biery said he wouldn’t want to start a fire intentionally near such a historic site. Instead, last summer, crews used leaf blowers and thinned out the fuel for a potential fire.

“That was one of our biggest concerns when this fire broke out this being right in the middle of it Nuttallburg is one of our major historic sites,” he said. “It’s really probably the best preserved coal site representing that time period anywhere.”

Though the fire came within feet of a structure that houses a conveyor belt used to transport coal from the mine mouth downhill to the tipple, it was not damaged.

“So what we do in an area like this is mechanical thinning, again to reduce the fuel loads all around these sites,” he said. “So when something like this happens, there’s not as much fuel to burn, and hopefully it stays off the buildings.”

As Biery finished showing us around the fire zone, a light rain started falling. It soaks the blackened ground and restarts the life cycle of the forest floor. A cycle that includes fire.