Louisville Public Media has promoted longtime politics and government reporter Ryland Barton to Managing Editor of Collaboratives. In this newly created role, Barton will serve as the editorial and operational leader of the Ohio Valley ReSource and the Kentucky Public Radio Network.

Barton has spent the past seven years as Capitol Bureau Chief for Kentucky Public Radio. 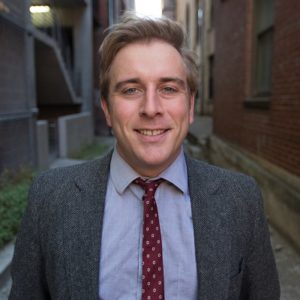 Barton will lead future efforts to expand statewide and regional coverage for partner stations to better serve existing audiences while attracting new ones.

“The challenges our country faces don’t stop at county or state lines, which means great public service journalism must be collaborative,” said Louisville Public Media President Stephen George. “Ryland is an outstanding journalist and believer in the importance of independent journalism to serve rural communities and news deserts. His leadership will help take these collaboratives to a new level of service.”

“These collaboratives allow us to boost coverage of the region at a time when many local news outlets are shrinking, helping us dig into stories that celebrate our communities and reveal our common challenges,” Barton said. “I’m thrilled to work even more closely with the KPR stations and continue OVR’s mission of telling untold stories in under-served parts of our country.”

Louisville Public Media is also a proud member of the Kentucky Public Radio Network and manager of the Ohio Valley ReSource, a regional journalism collaborative reporting on economic and social change in Kentucky, Ohio, and West Virginia.