Though they’re about 5,000 miles apart, Appalachia has a lot in common with Ukraine, especially the rugged Carpathian Mountains in the western side of the country.

A group of scholars has been exploring the parallels between the two regions for years. And Russia’s invasion of the country could once again put the country’s fiercely independent mountain people at the center of a resistance.

This interview has been edited for clarity.

Miller: I mean, just starting with kind of topography, that’s the first thing that people notice. The mountains in the Carpathians are very similar to what you see, especially in East Tennessee, North Carolina, and Virginia, a little less so than the Cumberland Plateau side where we have those rocky cliffs and stuff in eastern Kentucky. and then the way villages are nestled. They  call them villages, we would call them hamlets or small towns, or whatever, are nestled in the low ground between or where rivers kind of run together and creeks. And there’s a lot of similarity where the way you have to stitch highways through it, following natural pathways and railroads and things like that. 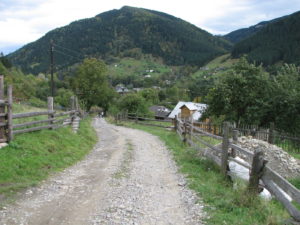 A road in Krivorivnya, a village in western Ukraine.

On how the geography and topography has created a similar kind of community feel in both places:

Miller: I think that’s where you start to go beyond the look and geography. Well, it doesn’t sort of guarantee a certain history or trajectory, it can suggest certain possibilities. And so you get what we call hollers, and they call villages, tucked back in isolated places. And that creates structural similarities in how people work and how their culture came up and how they have to go attend, to go out to get some work and then they’ll come back. Sometimes they might move away for years, like people have moved from Appalachia to Ohio, and Detroit and all this to work and then go back after 20 years. That happens there. People will go off for an education and then they get education and can’t imagine how they’re going to use it in that little holler when they get back. And so they don’t go back and they don’t bring that knowledge back with them. So that topography starts to create dynamics that are similar. And that we are wrestling with in Appalachia.

On how the Carpathian Mountains physical location affects their significance in the current Russian invasion:

Miller: Yeah, so I bet a lot of people these days, with the conflict going on there now have maybe looked at a map of Ukraine for the first time. In the far western side, the Carpathian Mountains cut across top to bottom, basically north to south of that western side of Ukraine. Like Appalachia, that’s the place where people could resist longer. So it didn’t become part of the Soviet Union until after World War Two. It’s a minority area of Ukraine, and like Appalachia, it’s a place where people have been able to sort of resist being acculturated longer and resist certain social transformations. They were able to resist collectivization of farms and things of agriculture in the Soviet world more successfully. They kept their religion because they didn’t, it was so remote in that area, they didn’t really try to stamp it out like they did in other parts of the Soviet Union. So the small, small hamlets have a small church, just like you travel the hollers of Appalachia. 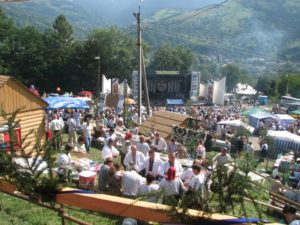 A cheese festival in Rhakiv, Ukraine.

On why the region is important to understand in the current moment and beyond:

Miller: At Berea College, we use this phrase: “kinship of all peoples.” Our experiences, and the things that play out in the world often are a mirror that look back on us. And so I think that people in Kentucky and in Appalachia, they have something maybe to learn with this, that they can also relate better to those people. When you watch the news, you see little arrows on on war maps, or they talk only about Biden, and Putin and Zelensky. Those are the political leaders, but this is a struggle between peoples and it’s helpful to know what the people are feeling and experiencing and how this kind of is rooted in their culture and heritage. I think it’ll help us understand better what’s going on and maybe it’ll help us think of more effective ways to respond.