Kaycee Steele had to raise menu prices at Route 11 Pizza Plus in Booneville, Kentucky last month. She opened the small business in July, but it’s been tough running a new restaurant during the pandemic. And since she opened, she said some of her food prices have tripled. Now her food supplier is charging extra for deliveries.

“It added an almost $8 fuel charge. That was the first time since we’ve been open we’ve had a fuel charge from a delivery truck,” she said. “So that was kind of my last straw.”

Steele grew up in Owsley County and is proud to employ people from hometown. But the recent surge in gas prices has put the squeeze on her new business. On top of the increase in food costs, she’s worried higher gas prices are hurting her delivery driver.

“I want him to feel like he’s making money, but also the fuel cost, his $10 here and there is not what it used to be,” Steele said. “He could put, you know, 20 bucks in gas delivery for two days now that 20 bucks is barely a day.”

Ultimately, Steele wants to buy a delivery car for the business, but can’t afford it any time soon.

At the end of March, the average price for a gallon of gas in Kentucky was just below $4 dollars. Prices are above $4 a gallon in and around the state’s largest city, Louisville. Although gas is slightly cheaper in some rural areas by about 10 to 20 cents, that’s not the case in Owsley County and surrounding areas. It isn’t near any major interstates and also has one of the highest poverty rates in Kentucky.

The surge in prices has rippled throughout the region, where people already have to drive far to commute to work or school, visit family and run their businesses.

Before gas reaches the pump, it’s hauled in trucks by a fuel distributor like Riley Oil in Richmond. Owner Bob Riley said his business and customers operate on lines of credit. Because of the higher cost of fuel, reaching a credit limit can happen fast, which can disrupt the supply chain.

“I’m supposed to be delivering this load to the store who’s about to run out, but I hit my credit limit. So I can’t get the fuel, which means that store owners are not going to get the fuel,” Riley said. “Or the store owners credit with me — he hits the ceiling on it — he’s almost out of fuel, not that he’s selling anymore, but the dollars have changed.” 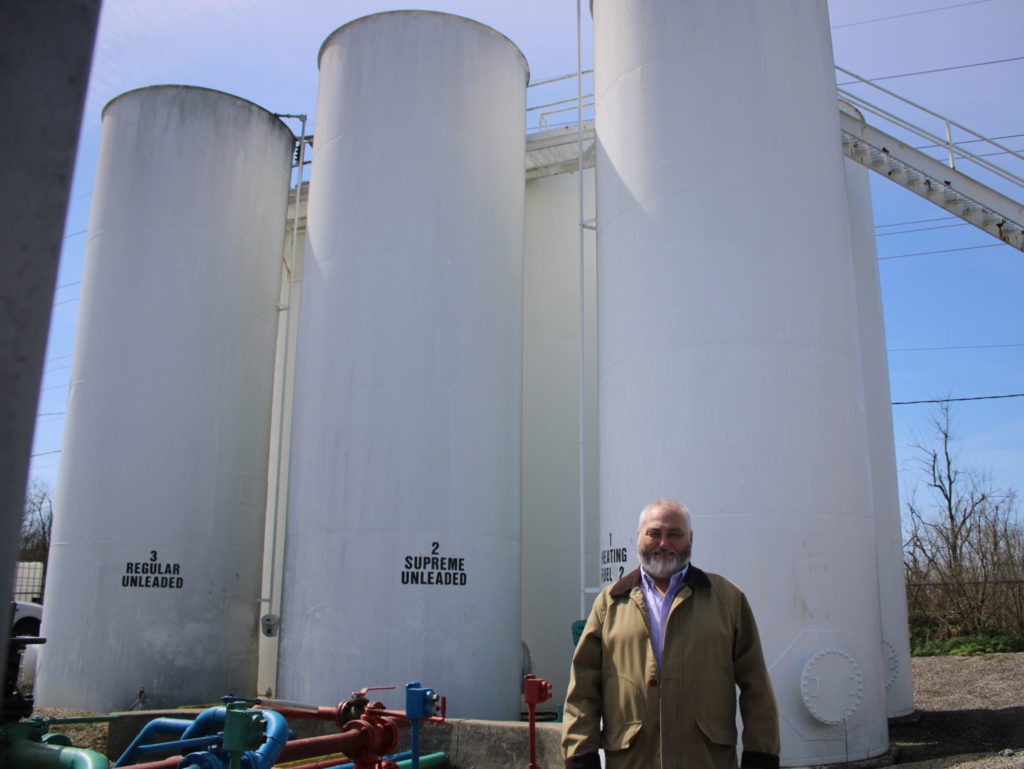 Bob Riley is an owner of Riley Oil in Richmond.

Riley said fuel and freight rate charges have also increased along with the price of diesel, which has doubled over the last two years.

“It also has a big effect on that hotdog you just brought at Kroger’s and the produce, all your goods because everything’s—at some point in the distribution chain—carried by a truck,” he said.

Phyllis Marshall lives on a fixed income and recently moved back to Owsley County after 40 years away. She’s had to limit trips to the grocery store and even to see her family in Shelbyville.

“It affects everything. Every single thing. Going to the store and food is higher, and gas is higher. And you think, ‘Am I gonna be okay this month?’”

Marshall doesn’t have a way to supplement her income. She said, “It’s scary.”

Commuting long distances is common in rural areas, and has become even more important as population and investment declines in rural parts of the country. Dee Davis, president and founder of the Center for Rural Strategies, said rural economies have been in a squeeze for some time.

“We have seen a decline in the retail sector and also in the industrial sector so it makes it tough as people try to find work in cities they have to drive farther,” he said. “So all of these things are coming together to make problems at the gas pump hard to deal with. So right now it’s a tough time.”

“Minimum wage can go up. It has been too low, too long. And we can make Earned Income Tax Credits permanent,” he said.

Lesa Marcum is the director of the Owsley County Library. She helps library patrons with everything from job applications to FEMA aid and she said she’s concerned about gas prices because many people have long commutes from her county.

“We have a lot of students that are going to Hazard Community College [in the nursing program] and they drive…and I really worry about them because most of the time they have to go five days a week,” Marcum said.

Round trip, it’s a little more than 100 miles between Booneville and Hazard.

Megan Warner also works at the Owsley County Library. She’s considered walking to work to save on gas. But one of her family members doesn’t have that option.

“She lives I would say 20 minutes away from where she works. And she’s even had to cut days off of work because she can’t really afford to go back and forth on a minimum wage job,” she said.

Warner said it’s tough for people to imagine what it’s like to live in a rural area with low-paying jobs and limited housing.

“People tell you a lot, too, that you just need to get out there and work hard,” she said. “It’s hard to work hard when they basically just push you down with all these high prices that probably aren’t going to get any lower anytime soon.”

Gas prices have decreased slightly in recent weeks, but according to a recent AAA report, the ongoing war in Ukraine and supply chain issues could send prices rising again.