Ruth Cummings gingerly leaned over the boxes of produce in the hot June sun, looking through the bags of greens, carrots and apples laid out in front of the old church building that serves as the local food pantry.

With prices surging at gas stations and grocery stores, these donated boxes are a small relief for the 75-year-old in the small western Kentucky town of Fulton, a community that’s built its commerce from being a railroad stop along the way from New Orleans to Chicago.

“Just seems like everything keeps going up and up and up and up,” Cummings said. “When you’re on a limited income retirement, it goes faster than it comes in.”

Inflation is stripping purchasing power from people buying food, gas and other necessities even as politicians in Congress and state legislatures chip away at enhanced public assistance provided during the pandemic.

Those on the front lines of food pantries and food banks in the Ohio Valley are trying to meet the ballooning demand, though they expect to see more hunger and need in the months ahead.

Inside the Ken-Tenn Food Bank, volunteer director Ginger Bard knows the people she serves well, including “Miss Ruth.” Cummings had told her she struggled to pay utility bills, and how the food distributions at the pantry help tremendously.

“They all say the same thing. That the money is getting so short. That this helps,” she said. 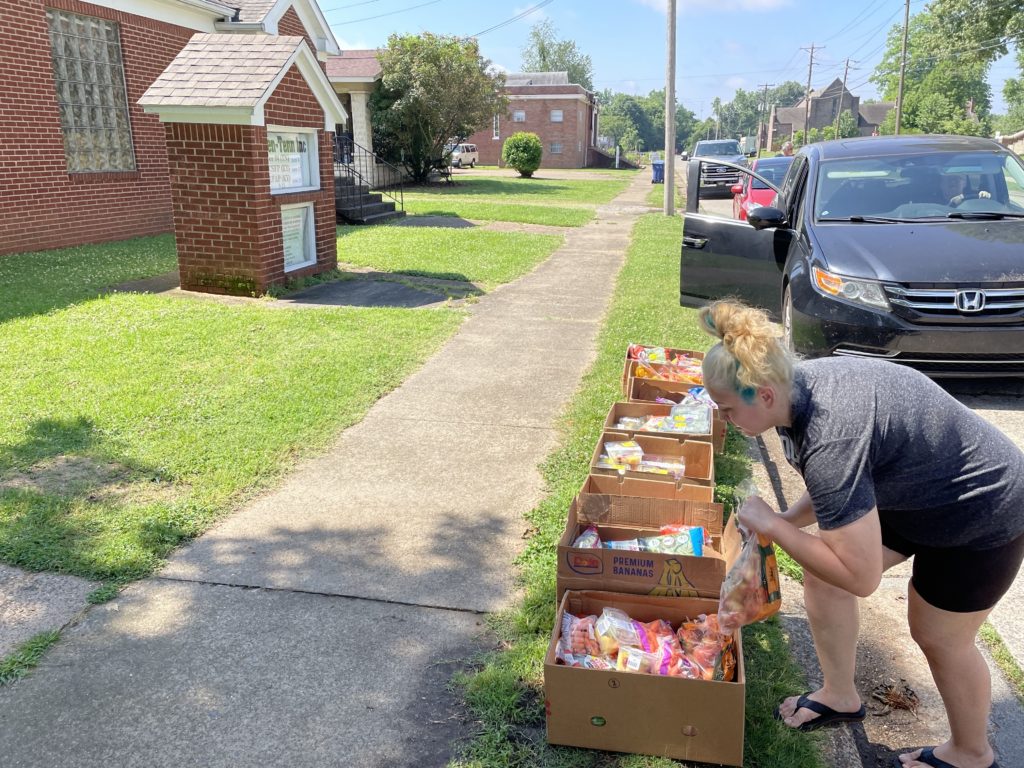 Latoya Maurer came with Ruth Cummings to put up produce for her family.

Food prices have soared by more than 10% over the last year, the largest increase since 1980. Gas prices have seen an even more dramatic spike with prices rising nearly 50% more compared to May 2021.

A state-by-state survey from the U.S. Census Bureau measuring levels of food insecurity among households found more than 1.6 million people in Kentucky, Ohio and West Virginia reported they sometimes or often did not have enough to eat — a 47% increase since the start of the year. One food bank leader serving around 130,000 people in eastern Kentucky, southeastern Ohio and West Virginia, has seen a 27% increase in demand for food compared to the same time last year.

Facing Hunger Food Bank executive director Cynthia Kirkhart said fewer food donations are coming in because food is more expensive and the costs to purchase food to distribute is spiking as well.

Last year, the food bank spent around $2 million on food to supplement donations. Kirhart expects to spend at least double that this year just to keep up.

“That really was a perfect storm of creating much higher demand on pantries and certainly the food banks,” she said.

In Ohio, the state association of food banks is asking Gov. DeWine for $183 million in American Rescue Plan Act funds to hedge against the financial pressures food banks are facing.

Rose Frech, the director of the Southeast Ohio Food Bank, said their network of 78 food pantries has seen a 58% increase in emergency food demand since January. Frech said that’s in large part because of inflation, something that’s especially difficult for elderly people on fixed incomes.

“We're talking about the working poor or people on fixed incomes, who are going out and buying groceries like the rest of us do, but they just don't have enough to make it work,” Frech said.

On Friday, economic pressures including inflation and supply-chain issues forced the Southeast Ohio Food Bank to significantly downsize its food distribution services this summer throughout the region, stopping distributions that combined served 1,000 people a month. The Appalachian counties the food bank serves have some of the highest rates of poverty in the state.

“We hear from food pantries every day regarding limited supply. They are rightfully concerned that they will not be able to meet the need in their local communities,” Frech said in a statement. “All we can tell them is that we’re doing everything we can, but it’s a heartbreaking situation when we know families are going hungry.”

A spokesperson for DeWine has said the Republican’s administration is reviewing the proposal from the state association of food banks for more funding. The spokesperson also said it’s not “prudent” to use the state’s rainy day fund for purposes other than to stabilize the state budget. According to Pew, the state has $7.4 billion in reserves.

While inflation has brought new faces to the Ken-Tenn Food Bank in Fulton, Bard said the growing lines are also the real-time effect of a receding pandemic-era safety net.

In March, the GOP-controlled legislature ended Kentucky’s COVID-19 state of emergency. With it, state lawmakers cut off the extra funding for food assistance the federal government offered to states during the pandemic, said Dustin Pugel, senior policy analyst with the progressive Kentucky Center for Economic Policy.

“There's a real hunger crunch that we're facing here in the coming months,” he said. “It's going to be difficult. I mean, we already were a state that faced a lot of food insecurity, and I think that's not going to change.” 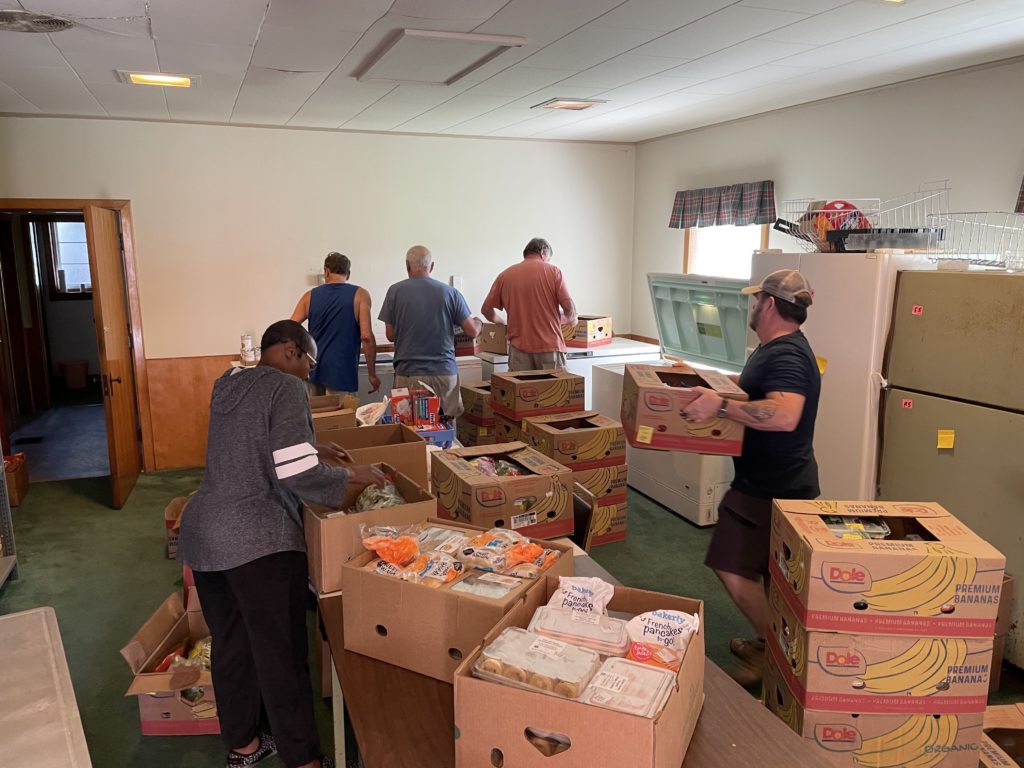 Many volunteers unpacking food donations at the Ken-Tenn Food Bank are members of the local church across the street.

Bard, the food pantry director in Fulton, said her community is reeling from the drop in benefits. About 1 in 4 people of Fulton County’s 6,500 residents use SNAP benefits. Generally, the gross monthly income and assets for those who qualify for SNAP has to be at or below 130% of the poverty line.

“Our SNAP benefits have dropped, and they're beginning to kind of panic a little bit,” Bard said.

SNAP benefits aren’t the only pandemic-era governmental support that’s on the chopping block. Congress allowed the expanded child tax credit to expire in December, which offered families monthly payments in the hundreds of dollars.

School districts that were allowed to deliver summer meals directly to childrens’ homes during the pandemic could have those flexibilities taken away if Congress allows federal nutrition waivers to expire at the end of this month. Some lawmakers have made a last-minute push to try to save some – but not all – of the waivers, sending legislation to renew some of them to Biden’s desk to sign.

The vice president of the national School Nutrition Association, who works at a West Virginia school district, recently called the prospect of expiring nutrition waivers an impending “crisis.”

Back in western Kentucky, Cummings carries a few bags of apples into her minivan to take to her homebound neighbors in Fulton.

She’s known them for decades and built lasting friendships. One neighbor’s daughter even gave her a drawing of an angel that Cummings keeps tucked away in her bible.

These days though, some of her neighbors can’t get out much due to medical conditions, with doctor bills and gas costs making it harder for her neighbors to get by each day.

In a community that’s relying on each other in a time of increased need, Cummings said bringing food is simply about being a good neighbor. 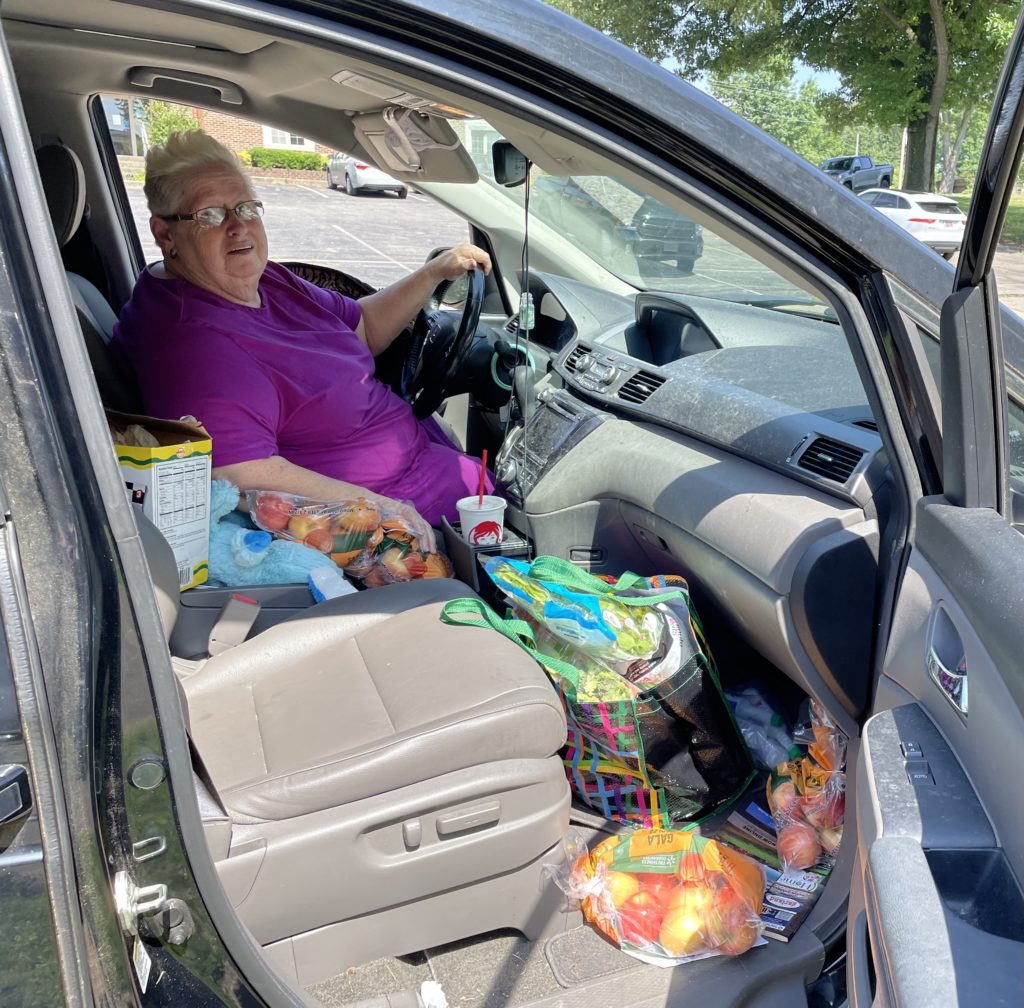 Ruth Cummings, 75, has lived in Fulton, Kentucky for decades.