It’s a cloudy summer morning in the mountains, and Lois Thompson has just started heading home from the Letcher County Farmers Market in Whitesburg.

But she can’t even pull out of the parking lot before her car is flagged down by Valerie Horn, one of the organizers of the market. Did she find what she needed, Horn wants to know.

“Oh man,” Thompson tells her. “I got beans galore. I’ve got watermelons, I’ve got apples, I’ve got cucumbers…some other stuff.”

“How is your home?” Horn asks.

“Thank the Lord as well as it is,” Thompson says.

“How is your home?” has quickly become one of the most common questions you’ll hear in eastern Kentucky. Thousands of homes here were either damaged or destroyed in this summer’s historic flood, which has taken 39 lives and affected thousands more across a huge swath of the mountains. People here will tell you that everyone has been affected somehow: if you didn’t get flooded, you know someone who did. Or your workplace did, or your church.

In Letcher County, the farmers market was no different. Horn says the vast majority of their growers had damage, with many taking heavy crop losses.

“We were not sure how our market was going to continue,” she says.

And while losing a farmers market would be a blow for any community, the market here is a big deal.

In eastern Kentucky, healthy food can be hard to come by, whether due to cost, or because it’s not always easily accessible. So the Letcher County market has been intentional about casting out a wide net to the community. Among their many outreach programs, they do things like doubling the buying power of SNAP recipients, along with implementing creative ideas like the “Farmacy” program, where local doctors can “prescribe” free money at the market for people with certain health issues, like Type 2 diabetes.

“There are people who depend on this just like people depend on paydays,” Horn says.

But after the flood, some of those people who already depended on the market basically became homeless overnight. Across the region, some are still living in tents, or even inside moldy houses, weeks later.

Amid the crisis, the market took a week off to regroup. But then came a wild piece of news: a huge supply of produce was being donated, to be given out for free.

“We started the market with maybe 100 people in line, at 7:00 this morning,” Horn says. “So this produce, and this burst of fresh food, matters to so many in our community.”

The effort was coordinated by the Kentucky-based LEE Initiative, with help from the international nonprofit World Central Kitchen. All told, growers across the region are donating enough produce to stock the farmers markets in Letcher, Perry, Knott, and Breathitt counties—all areas devastated by the flood— until mid-September.

This produce is free at each market, for anyone who wants it. 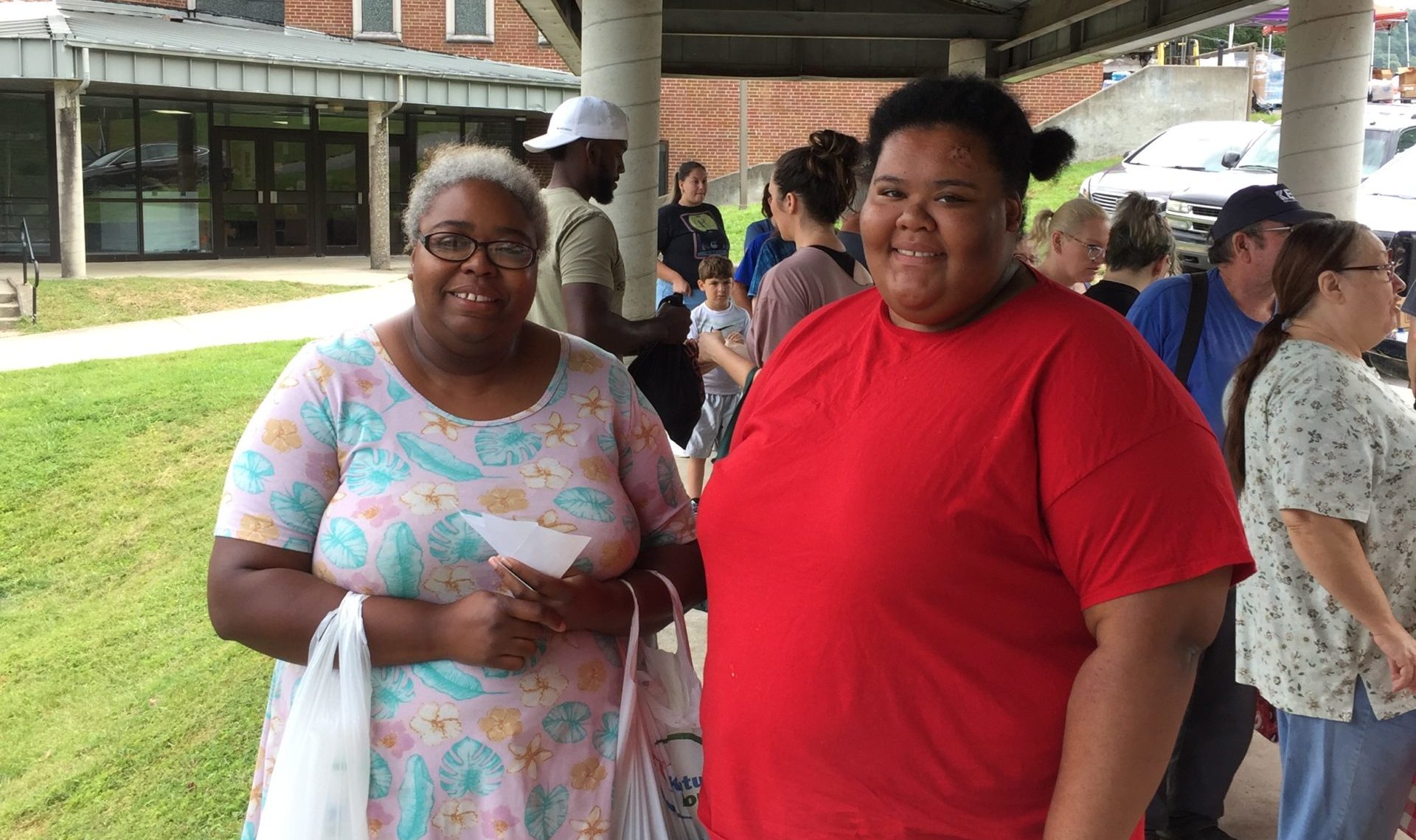 Angela Maggard and her daughter Vatasha at the Letcher Co. Farmers Market

At the Letcher County Farmers Market, Angela Maggard is shopping for her family of five.

“If you had caught me a few minutes ago, I was standing in line crying. Because we’re very thankful,” she says.

During the flood, her house was damaged, a mudslide covered her driveway and the road to get out collapsed.

“We were trapped for a few days,” she says. “So we just ate canned goods and things that didn’t require cooking, because we didn’t have electricity, or water, or anything like that.”

Maggard’s family has, for the moment, found dry housing elsewhere, but they still need to eat.

“A lot of processed food is not good for you,” she says. “And that’s kind of what they throw at you in a disaster.”

Maggard has high blood pressure as well as prediabetes, which means she could be in danger of developing Type 2 diabetes in the next few years. So even in a crisis, she says eating well is important to her.

“You’re just trying to make sure everyone’s okay, and you’re not really thinking about yourself,” Maggard says. “And I found my sugar to be dropping. Produce helps to keep your levels where they need to be, so that you can be the best for your family and those that might need you.”

In all, the market provided free or subsidized produce to about 250 people on this Saturday morning. And that’s not to mention paying customers. Market organizer Valerie Horn says they’re still looking for ways to support the farmers who usually sell at the market. But in the meantime, she says, they’ll be back here next week.

“Today was hopeful,” Horn says. “And the biggest inspiration was the community showing up. They’re still here. They still need this.”

Apart from the produce, maybe just as important to the community is the fact that the market is back in the first place, giving people a chance to check in, to hug, to catch up.

One of them is Bob Smith, who lost his Whitesburg home in the flood. He and his wife were rescued by boat, from their porch. By the time help arrived, he says the water was up to his wife’s chest in her wheelchair.

“Sometimes she would start to float up; I’d push her wheelchair back down,” he says.

But today, with fresh cucumbers in hand, Bob runs into his friend Louise Murtaugh, who helps manage the market. He asks, with a smile, how she’s doing up at her house.

“We’re all looking for a hill now!” Smith says. 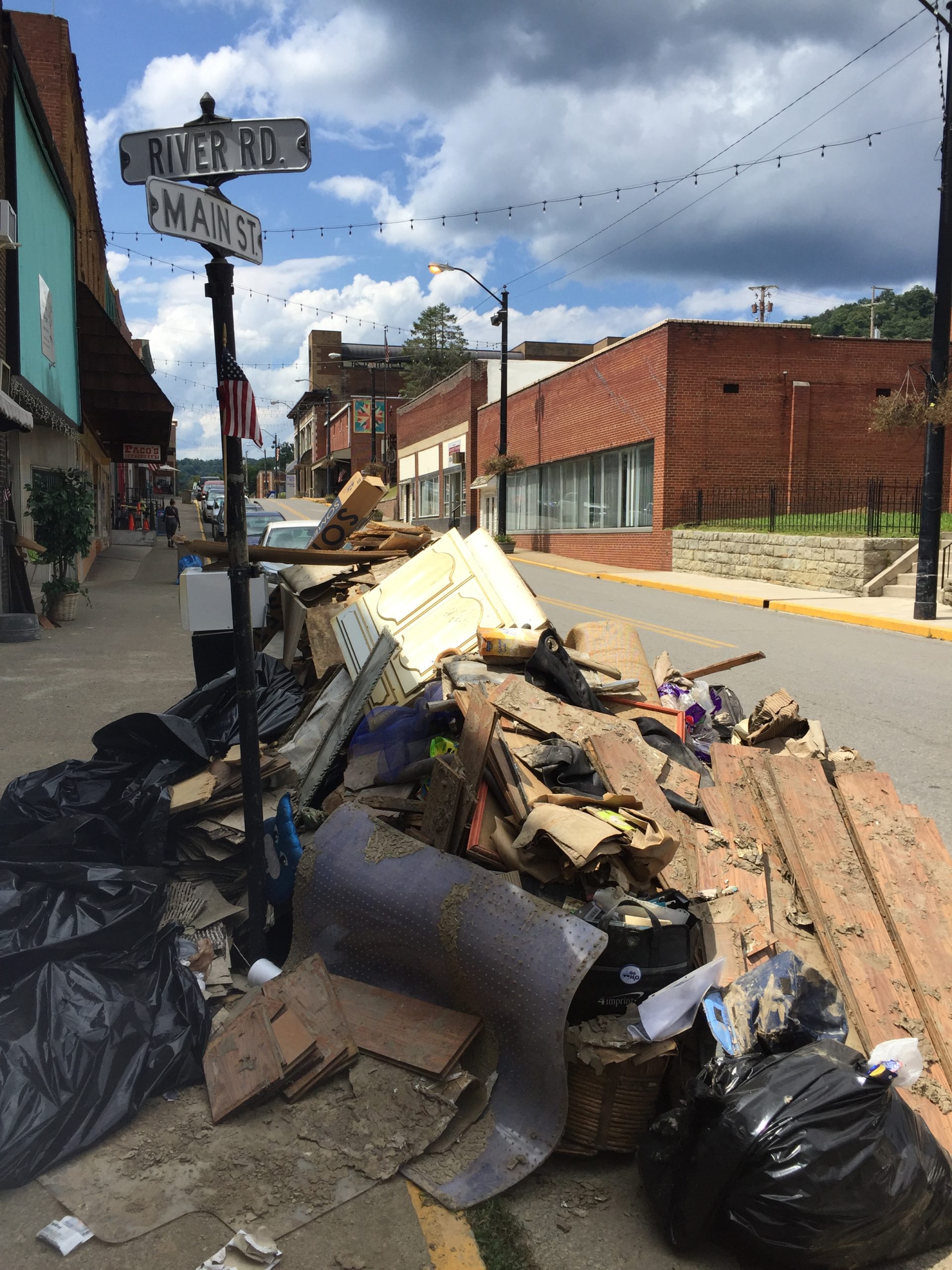