Donate Now!
A tax to provide benefits to black lung victims is permanent, but might not fix all the fund’s problems

A tax to provide benefits to black lung victims is permanent, but might not fix all the fund’s problems

It’s early in the morning outside a Hampton Inn in Hazard, Ky. A bright blue-and-white RV covered in larger-than-life portraits of coal miners sits smack in the middle of the parking lot. Standing outside of it is Christopher Parker with the National Institute for Occupational Safety and Health.

“Hey! This is NIOSH. Here’s our mobile unit. Come to us. It’s your program. It’s your truck,” Parker tells any coal miner who stops by, reciting the agency’s basic pitch.

The program he’s talking about is a free test for black lung, provided by the federal government. And the inside of his conspicuous RV is basically a tiny doctor’s office set up to do just that. This August, it tested more than 500 miners across Kentucky, West Virginia and Virginia. 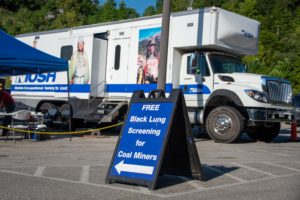 A large sign points in the direction of the NIOSH mobile unit. The agency takes the clinic to public places to encourage miners to get tested for Black Lung disease at their convenience.

“We take it all around the country,” Parker said. “We’ve unfortunately had to pause for the past few years because of COVID-19, and that’s three years that miners may not have had notification of their developing black lung.”

Black lung develops when miners inhale coal or silica dust and the disease can’t be cured. About half of all black lung diagnoses come from this mobile unit, according to NIOSH. But they estimate only about 40 percent of miners actually get tested, which is why the agency tries to make testing as convenient as possible by parking outside mines or in public places.

If a miner is diagnosed with black lung, they can seek money from a former employer to help pay for medical visits or disability, similar to a worker’s compensation plan.

But what if the coal company has already closed or gone bankrupt like so many others?

That’s where the Black Lung Disability Trust Fund comes in. The federally managed fund is financed by taxes on coal, and it pays miners in lieu of a responsible company. 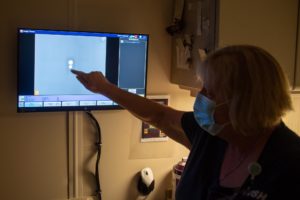 To be diagnosed with Black Lung disease, many miners undergo chest x-rays inside the mobile NIOSH clinic. The technician showed a demonstration x-ray she made using what she had on hand: pocket change.

But there’s an interesting rule about the coal tax that finances it: The rate wasn’t set in stone when it was established in 1977. Most years, the highest it went was $1.10 per ton. But sometimes, Congress wouldn’t revisit the tax rate, and it would drop to a maximum of just 50 cents per ton.

But that all changed with the recent passage of the Inflation Reduction Act. Among its many provisions, it cemented in place that higher excise tax.

“We were pushing for a 10-year extension, so to see a permanent extension with the realization that the words ‘excise tax’ never have to leave my mouth again is very exciting,” Courtney Rhoades, black lung organizer at the Appalachian Citizens Law Center, said.

Rhoades has worked with people living with black lung for years, helping them navigate the often confusing process of accessing the benefits. Lately, they’ve been lobbying and gathering public support for an extension of the tax, so a permanent fixture is a big victory in her book.

“The money side of it is so little, but the health benefits that come from someone having black lung benefits are absolutely needed,” Rhoades said. 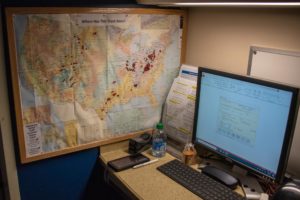 The NIOSH black lung clinic travels different places each year to provide free testing to miners. In 2022, it traveled to parts of Kentucky, West Virginia, and Virginia where a growing epidemic of Black Lung disease is mostly concentrated.

The coal industry opposes this tax and pretty much everything in the Inflation Reduction Act. They say they support the concept of coal miners getting help for black lung disease. But they balk at how tens of millions each year wind up going to federal agencies to manage it.

“We think we’ve paid more than our share of it and that the fund itself has been run very, very sloppily,” said Mike Cope, president of the Ohio Coal Association. “There’s huge administrative fees in the thing that peel off a lot of money. So it doesn’t do us any good to increase a fee that we’ve been paying for years.”

Cope also argues that, in the long run, other provisions of the act which incentivize everything from solar panels to electric cars will hurt coal production. That, in turn, will eventually mean less tax going into the fund.

“There’s no coordination…and again, when you knock down our industry, that reduces the number of dollars going into that fund,” Cope said.

That’s one thing coal companies and labor unions agree on.

Phil Smith with the United Mine Workers of America says the union is excited for the permanent tax, especially as they hold bad-acting companies responsible for causing black lung in the first place. But he worries a future with less coal puts the fund in jeopardy, and young miners diagnosed with the disease will need assistance for the rest of their lives.

“So where does that leave us with respect to the money that’s going into this fund?” Smith said. “We have to find ways to finance this fund.”

Smith also points out that the Black Lung Disability Trust Fund is already massively in debt — and a permanent tax probably won’t be enough at this point to balance the books. That’s because the law says payments must still be made to former miners.

“Benefits don’t get cut, they continue to get paid,” Smith said. “But it’s the taxpayers who pick up the burden instead of the coal companies.”

Smith says with rising cases of black lung, Congress needs to figure out new ways to finance payments to miners. That’s as advocates gear up for their next fight: an increase in benefit amounts to keep up with – perhaps ironically, given the act that just passed – inflation.