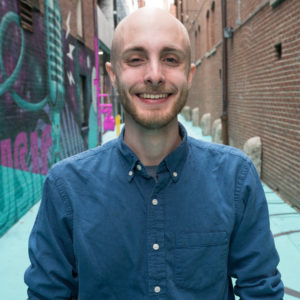 Liam Niemeyer grew up listening to NPR on the way to school in Ohio, and he eventually learned how to tell stories himself like the ones he heard every day. As a reporter for the Ohio Valley Resource, he covers agriculture and infrastructure in the Ohio Valley and also serves as Assistant News Director at WKMS Public Radio in Murray, Kentucky. He has done stints as a reporter and producer at Wyoming Public Radio, KRBD Community Radio, WCPO-TV, WYSO Public Radio and most recently at WOUB Public Media in Athens, Ohio. At WOUB, he led and supervised a team of reporters on “The OUtlet,” a magazine-style news radio show. His stories have ranged from covering a historic celebration on a remote Indian reservation in Alaska to covering the 2016 general election from the Ohio Statehouse. He is a recent graduate of Ohio University, and in his free time, he enjoys playing a mean tenor saxophone.

As President Donald Trump addressed farmers at a national conference Monday Ohio Valley agriculture leaders said they are standing by his effort to renegotiate trade deals. But some leaders cautioned that costly tariffs on farm products need to end soon. President Trump doubled down on his fight for better trade deals during his speech to […]